After the recent JOURNEY posts here one of you asked as well for “Departure“, in its Japanese Deluxe Paper Sleeve Mini Vinyl LP Replica package and pressed on a high quality Blu-Spec CD2 disc. It uses the last DSD remastering and on this CD format it truly sounds fabulous.

The first Journey album in the ’80s, “Departure” arrived at a crucial moment during the band’s transition from jam-friendly progressive rock to an arena-ready mainstream AOR sound, and found the band continuing to streamline its songwriting in an increasingly successful quest to invade Top 40 radio.
True to its title, the album served notice that the group was closing a chapter in its history by embracing a new direction while letting go of some formerly ingredients.
“We named it that because there’s going to be a little bit of a musical change,” singer Steve Perry teased in a spring 1980 interview. “We’re departing from some of our roots and keeping some.”

Despite many people think the new ‘commercial’ approach wanted for “Departure” came from Steve Perry, in fact it was guitarist Neal Schon & Columbia Records whom aimed for a more rocking, melodic, intense sound.
Part of that intensity derived from a switch in producers. Having openly groused about working with Roy Thomas Baker, the band hired Kevin Elson to co-produce alongside engineer Geoff Workman, adopting a live-in-the-studio approach to tracking “Departure” which provided much more muscle to the music.
It all added up to an album that, while perhaps somewhat edgier sonically than the previous, was still eminently radio-friendly. 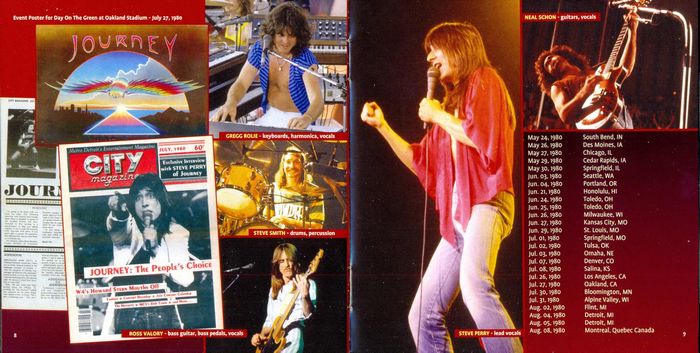 “Departure” climbed to No. 8 on the album chart and summed up the Journey of 1980’s Top 40 appeal with its lead-off track and first single ‘Any Way You Want It’, one of my favorite Journey songs ever.
There’s the slightly bluesy, catchy ‘Walk Like A Lady’ (which also did great on the charts), ‘Where Were You’ has an terrific melodic chorus, ‘I’m Cryin’ contains some of the most amazingly emotive Perry vocals ever, and ‘Line Of Fire’ absolutely smokes.
Another favorite of mine is ‘People and Places’. I don’t know what it is about that song, but with the way the different members each sing a word one after the other combined with the haunting (in spots) sound of the keyboard, this one still can send shivers up my spine. Very unique track.

“Departure” also would mark the last full-time studio album appearance of founding member Gregg Rolie, and his penultimate recording with the band – his final contributions would appear on Dream, After Dream, a soundtrack album to the Japanese film of the same name, from which ‘Little Girl’ is added here as bonus track.
Rolie had become tired of life on the road and decided to leave the band after assisting in the selection of his replacement, talented Jonathan Cain, then of The Babys. Rolie sang lead vocals on only one song on “Departure”, the blissful, melodic midtempo ballad ‘Someday Soon’. 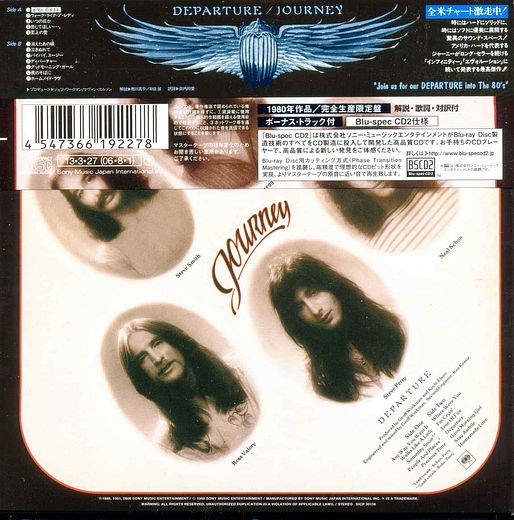 “Departure” is one of Journey’s strongest albums, very well written & arranged, melodic and rocking at the same time. It went triple-platinum and Journey rode this success with a major tour. These gigs spawned the follow-up live album Captured, which was another major hot seller for the group in the ’80s.
This remaster pressed on BSCD2 is fantastic, I can hear more bass presence and an overall ‘studio ambiance’. Additionally you got 2 bonus tracks.
A must for Journey fans and highly recommended to all Melodic Rock / AOR enthusiasts.