Both albums from excellent British AOR / Melodic Rock act VIRGINIA WOLF were remastered by Rock Candy Records, and the pair are essential into the genre’s fan collection. “Push” was the title for the band’s second album, recorded in America with renowned Kevin Elson (Journey, Europe) as producer.

Virginia Wolf’s debut album caused major excitement amongst critics and fans alike. It was a heady, mature brew of class-A grade melodic hard rock / AOR with infinitely catchy songs (mainly drawn from the hands of guitarist Nick Bold), stunningly executed arrangements and astonishing vocals from Chris Ousey, one of the UK’s most celebrated front men.
“Push”, the band’s second and – as it turned out – final album, was produced in San Francisco by Kevin Elson, a man who was at the time experiencing huge success with Europe’s ‘The Final Countdown’.

The record presented a far more mature approach to their craft. Once again, the songs were magnificent, the production being equally as exciting and the arrangements beyond reproach.

Opener ‘Don’t Break Away’ is a terrific AOR tune, for sure among my favorites of all time. That keyboard / synths from the intro are the true AOR definition.
‘One Night’ is a monster smooth AOR gem with Ousey delivering a stellar performance, and the uptempo ‘Let It Go’ is AOR made for the arenas.
The band try something different with the orchestrated ‘Man In The Moon’ plenty of sweet synths, and then closer ‘The Strangest Thing [It’s Called Love]’ has a cadence (those keyboards!) to die for.

This Rock Candy remastered reissue includes two treasurable bonus tracks, originally single B-sides: the suave, elegant ‘Tearing Me Down’ bringing to mind the finest Canadian AOR, while ‘Matter Of Time’ is perhaps the song that most remind me to the first album, with epic verses by Ousey and yes.. more awesome synth stabs. 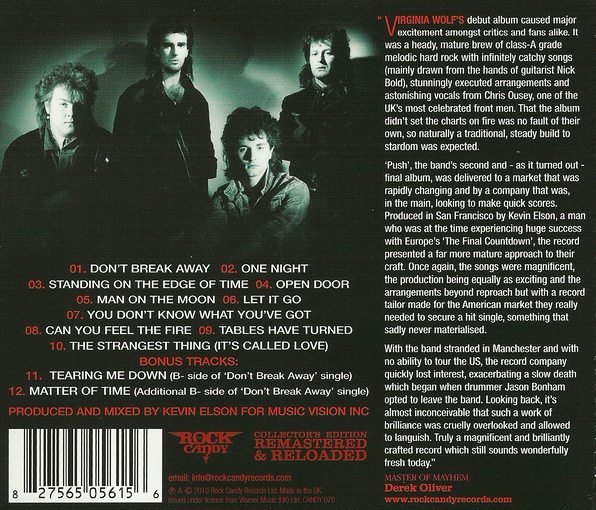 The sound in “Push” is pretty different to the previous Virginia Wolf album, you can hear Elson’s hand providing more polish and the overall feel is Americanized AOR.
‘Smooth’ is the word, and for many, “Push” not only is more ‘purest AOR’, but also the best Virginia Wolf album. I tend to agree, and while I love both, “Push” encapsulates all the ingredients this genre is all about.
A MUST HAVE