Signed & released by Frontiers Music, the self-titled debut from RADIATION ROMEOS is the new band formed by amazing singer Parramore McCarty, best known for being the frontman of such legendary US metal acts Warrior and famed Billy Idol guitarist Steve Stevens’ solo project, Atomic Playboys.
In fact, the inspiration for the name Radiation Romeos came from a line in the song ‘Atomic Playboys’.

Parramore McCarty’s career in music started when Robbin Crosby of Ratt gave him his start singing in cover bands. His first major label album was ‘Fighting For the Earth’ on Virgin Records in 1985 for the legendary US metal band Warrior.
The terrific Steve Stevens’ Atomic Playboys album followed in 1989 on Warner Bros, then McCarty returned to Warrior and also started gigging in the LA area with Metal Freqs and Monster Traxx.

Musically, “Radiation Romeos” moves in a classic melodic hard rock direction spiced in AOR with punchy edges thanks to the production of Michael Voss (Phantom 5, Casanova, Michael Schenker) who also contributed to the songwriting.
McCarty has clean melodious vocal delivery, sometimes a bit raspy and with a little metal pitched in. His partners Dag Heyne (guitars), Jogi Spittka (bass) and Gereon Homann (drums) are seasoned musicians and create a really solid background.

All songs in “Radiation Romeos” move on melody and harmony, plenty of rhythm and rich rock groove with catchy refrains. Heyne (founder member of Doc Heyne) lays down some terrific solos throughout.
On the harder side of thing we found ‘On The Tight Rope’, ‘Bad Bad Company’ and the edgy ‘Mystic Mountain’. Then ‘Monstertraxx’ is a song that brought from his former band of the same name, and you hear the band blurring the distinction between US metal and classic hard rock, and you may catch a subtle heavy bluesy groove underneath.

All is balanced with catchy melodic / hard tunes as the title track with strong AOR waves on it, the semi-ballad / midtempo ‘Like An Arrow’ including very nice acoustics, or ‘Ocean Drive’, where light piano leads into a delicious AOR breeze with great atmospheres.
Another song of interest is ‘Castaways’ which offers something different inspired by ’80s US melodic metal, built as an anthem beginning with a slick keyboard line, then moves into groove and muscular riffs plus a strong vocal arrangement. 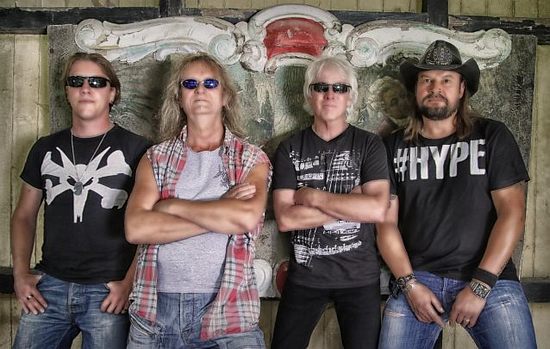 Fundamentally, what sells “Radiation Romeos” debut album is the terrific songwriting that neatly blends Melodic Rock / AOR foundational melody & harmony with the edge of classic hard rock.
Seriously, these are a bunch of pretty awesome songs, properly produced with a crisp sound. I really dig Radiation Romeos’ melodic feel with that ’80s vibe throughout.
Hopefully, this will not be a one-off project and more will follow. Highly Recommended.