Here’s another enjoyable cult classic album requested in its pretty hard to find version; the BGO Records remastered reissue of MAMA’S BOY’S “Power And Passion“.
Mama’s Boys consisted of three McManus brothers from deepest darkest Ireland; Tommy played drums, Pat ‘The Professor’ the guitars, and John at charge of lead vocals & bass.
Originally released in 1985, “Power And Passion” is their third and quite commercial album full of catchy and bright melodic songs.

Mama’s Boys were part of the NWOBHM wave, but as happened with most bands from that musical movement in the mid-Eighties they started to work on more accessible rock n’ roll.
Produced by the skilled Chris Tsangarides (Gary Moore, Girl, Magnum), “Power And Passion” is a melodic, polished record starting with the hard rockin’ ‘Hard ‘n’ Loud’, a stadium-ready rocker.

On ‘Straight Forward, No Looking Back’ we find a Def Leppard riff circa their High ‘n’ ‘Dry era, yet with ’80s flavored keyboards in the mix.
‘Lettin’ Go’ brings to mind Helix but Mama’s Boys add their own touch with some bagpipes and violins (performed by Pat) resulting in a unique tune.
‘Needle In The Groove’ is a bluesier, effective rocker where arise a bit one of the band’s major influences; Thin Lizzy.

‘Run’ is a commercial and ‘radiable’ melodic hard rocker with catchy choruses, again influenced by Def Leppard but also with an American feel – a market to where the album was created too – let’s say Night Ranger as example.
Title track ‘Power And Passion’ has some Kiss on it, with chopped riffs and a hooky chorus and the in the middle creating a great atmosphere with a nice keyboard arrangement. Very good, pure ’80s track.
The disc ends in full throttle with ‘Let’s Get High’, a fun Americanized hard rocker. 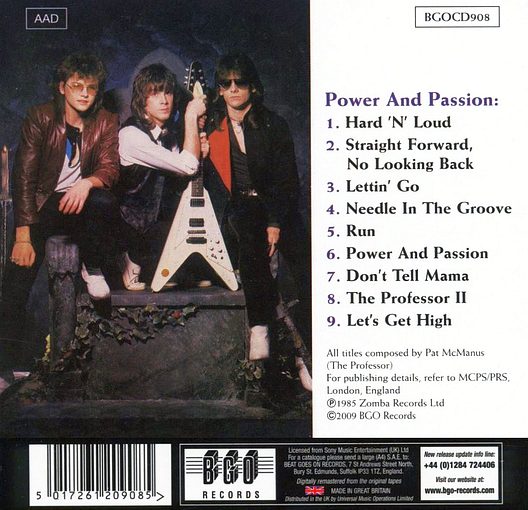 Mama’s Boys turned more AORish on their next album (my favorite from the band) but this “Power And Passion” ranks on par with it delivering a great mix mid-Eighties melodic hard riffs & catchy choruses embellished with typical ’80s keyboards.
This quite unknown BGO Records remastered version is the one to own as the sound quality obtained is really pristine still respecting the original Tsangarides’ sharp production.
HIGHLY Recommended