One of you asked for DREAM THEATER‘s “Images And Words” in its Japanese SHM-CD version. Appeared some years ago, this was the only press on this format, a Limited Edition, and of course, Out Of Print now.
Dream Theater’s first album When Dream And Day Unite showed potential of this amazing band, and it appeared in its fullest with this album featuring Canadian vocalist James LaBrie and the glossy production by master David Prater.

Simply put, “Images And Words” is a truly magnificent album, putting the virtuoso abilities of its members to good use without once sacrificing melody and songwriting quality. It deserves the praise it gets.
Opening the album is one of Dream Theater’s most popular songs, ‘Pull Me Under’. It’s a killer track and not a throwaway single in the least. The progression from the opening clean riff to the quicker distorted is terrific, and LaBrie shows from the off his elastic pipes. Overall, the song is pretty straight-forward for a heavier Dream Theater track.
Despite of being quite long, the track is catchy and accessible, it was definitely a good single choice and a good song to introduce people to the band.

There is simply not a bad track on the album.
Speaking about the most ‘progressive’ compositions, ‘Metropolis Pt. 1’ is a real delight, truly capturing the epic feel that the band was going for, from the building intro to the excellent ever-changing instrumental section in the middle. John Myung, whose bass work in Dream Theater is often unappreciated, gets a rare moment in the spotlight with a short but excellent bass solo.
It is followed up by ‘Under A Glass Moon’, which is equally impressive. It features LaBrie’s strongest vocals on the album, and also one of Petrucci’s finest solos, which is the centerpiece that holds the track together.

The shorter, softer and melodic tracks are a great complement to the more expansive material. ‘Another Day’ is a superb ballad, incorporating a saxophone that adds an ‘extra’ element to the track. ‘Surrounded’ is another gem more in a midtempo pace, slowly building but eventually cooling down at the end.
‘Wait For Sleep’ is an excellent emotionally-driven piano track that lets LaBrie deliver a more restrained performance for once. It works well on its own, but even better as an intro to ‘Learning To Live’.

LaBrie’s vocals do take getting used to for the uninitiated, particularly his occasional high-pitched wailing, but he proves himself to be a powerful vocalist, and despite not being praised as a metal vocalist, his vocals actually fit the music Dream Theater plays quite well, especially on this album. He is just as essential to Dream Theater as any of his virtuoso band mates.
He is particularly effective given that this was his first album with the band. While the guitar of Petrucci typically gets the most spotlight, the rest of the band performs just as excellently as he does.
Kevin Moore’s keyboard work is awesome, adding an extra level of depth. He also has a few solos (‘Take the Time’, ‘Under A Glass Moon’). Mike Portnoy’s acclaimed drumming is in full force here as well, as is John Myung’s underappreciated bass work. 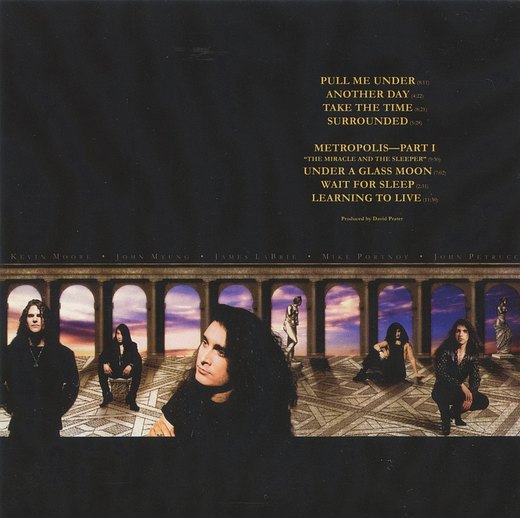 “Images And Words” is a true classic. Musically it is constantly engaging, and the songwriting is consistently outstanding. Dream Theater would be accused later in their career of being complex for complexity’s sake, overusing odd time signatures and letting their instrumental wanderings replace actual songwriting.
It may be true at places, but none of those criticisms apply to “Images and Words”.
While each member gets to show off his virtuosity, each song feels connected and not a moment is out of place. The instrumental sections that exist are there for the purpose of adding to the song, making the technicality that is displayed all the more enjoyable.

Many ‘radical-prog’ fans hate this album especially due the triggered drums and the polished, huge David Prater (Diving For Pearls, Firehouse) ’80s AORish’ production. But there’s precisely where lies its charm.
Dream Theater / Prater were able to create one of the most accessible progressive albums in history, and of course, as an ’80s sucker, I LOVE this sound.
“Images And Words” is a treat for both the prog fan and the casual music listener alike. This Japanese SHM-CD has a terrific dynamic balance and not, it’s not remastered. In fact, “Images And Words” never has been remastered. It does not need it. It is fantastic like it is.
A MUST HAVE