As requested, here’s the long time out of print “Delectable“, ROMEO’S DAUGHTER second album fortunately remastered by Rock Candy with pristine quality including a bonus track.
Romeo’s Daughter were UK’s answer to the popular American Melodic Rock bands such as Heart, Journey and Foreigner, with a slick sound designed by the incredible studio wizard John ‘Mutt’ Lange.

‘Mutt’ Lange handled Romeo’s Daughter debut album and was slated to produce “Delectable” as well. Fate, however, had something else in mind.
The band was delayed due to Mutt’s schedule and, eventually, had to move on without him. They also lost their record label and were forced to go the independent route.
Unfortunately, “Delectable” arrived too late, when the musical climate already changed, and the band was unable to break in America and ended up as one of the bands in the ‘should have made it’ file.

Switching to the independent Music For Nations label, they took the bull by the horns and got back to work crafting a stunning follow up to their critically lauded debut.
“Delectable” is a record stuffed to the gills with choice songs and exceptional vocal performances from Leigh Matty, proving that the band’s worth was just as valuable if not more so.

Among the pearls on this record there’s the upbeat “Have Mercy” which sounds like it could easily be reworked into a Def Leppard classic. “Addicted To The Animal” should have been a huge hit as sports an irresistible melodic line.
The band sounds pretty Americanized on “Nothing But Love”, specially on the catchy chorus, “God Only Knows” is a heartfelt track as is the beautiful mid-tempo AOR “Treat Me Like A Lady”.
Bonus track “Talk Dirty To Me” (originally a single B-side only) is just as tantalizing as the title sounds.

Of All the British melodic rock groups operating out of the UK during the late ’80s Romeo’s Daughter were, undoubtedly, viewed as the great white hope; they were the saviours of the scene, the band most likely to succeed.
Released in 1993, that “Delectable” ultimately failed to secure a foot hold to enormo-dome success was not the fault of the band or record, but more a sign of the times. Yet despite everything it remains one of the most revered Melodic Rock albums of the period. 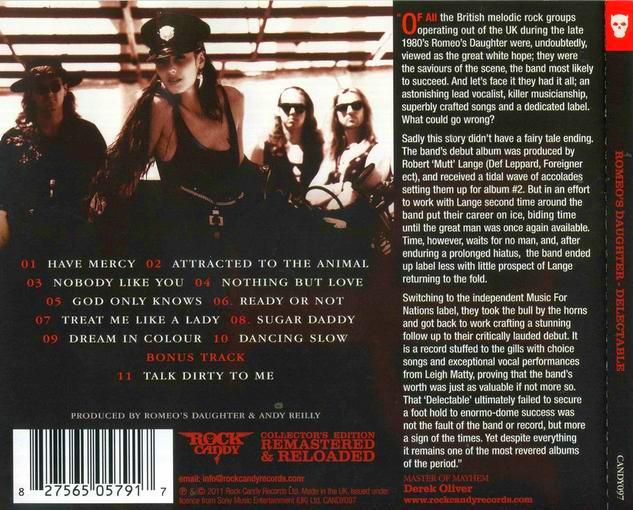 Really good Rock Candy 24-bit remastering from original source tapes, plus 3,000 word essay about the making of the album, interview with the band and additional photos spread out over a 12 page full colour booklet.
Another request fulfilled.
Highly Recommended