“Tangled In Dream“, the great 2000’s album by Australian melodic metal band VANISHING POINT, has been reissued as 2-CD Special Edition. After being out of print for many years and also not available digitally, this new edition finally allows to (re)discover one of the most impressive debuts of the genre in this new Century.
Disc 1 holds the regular album, while the Bonus Disc includes 10 bonus tracks; 9 of these available on CD format outside of Japan for the first time ever, plus a newly recorded song.

Although being classified as progressive metal, Vanishing Point’s music is in fact a mix of styles also including melodic metal, classic hard rock, acoustic moments, etc.
For those unfamiliar with the original album, let’s first take a look at “Tangled in Dream” in its individual version. The album opens with “Surreal” which has a nice spacey beginning and then transitions into orchestral instrumentals. This opening could be compared to the symphonic metal genre, though the more progressive, melodic instrumentation that eventually takes over is more similar to the likes of Rush.
There is also some notably good production which gives the vocals a pleasing echoed aesthetic.

This blend of metal, progressive rock and hard rock groove continues onto the next couple of tracks “Samsara” and “Closer Apart.” These songs are heavy enough for metal fans to enjoy but they also offer welcoming catchy hooks that more casual hard rock listeners will appreciate.

“Tangled In Dream” takes a much slower, melodic approach once it reaches track six, “The Real You.” The acoustic guitars give the song an impressively different style and lead singer Silvio Massaro absolutely seals the deal thanks to his skill and personality.
The following track, “Two Minds One Soul,” continues the quieter with a classic British metal feel with nice vocal harmonies.
This trend carries over into the ninth track, “Dancing with the Devil.” This song is definitely one of the most different moments on the album due to its mainly pure piano instrumentals. This track is the slowest moment on the CD and it arguably strays away from the band’s usual riff-driven sound, and it works as a fine breath of fresh air compared to the record’s heavier moments.

Final number is the title track “Tangled in Dreams” which for sure is one of most fascinating moments on the entire record.
This track has a shorter runtime, especially compared to the other songs, and focuses on a much more somber yet curious sound. The light, almost electronic atmosphere turns it into a deeply shivering song that might just be the best track on the stacked album and it’s sure to leave a lasting impression on listeners.

Disk 2 begins with “Samsara II,” a newly recorded version of the original track, and thanks to the heavier string section and better production (particularly in the vocals) it’s a solid improvement over the original, already impressive song.
The following number is a cover of Journey’s “Separate Ways”, and it’s terrific. The guitars are heavier, while the lead vocals are incredible, and I’m sure Steve Perry would be proud. One of the best versions I heard of this classic.

The impressive covers continue when Vanishing Point try their hands at Pink Floyd’s “On the Turning Away.” This track does a fantastic job of combining the band’s hard rock roots with the lighter shades of Pink Floyd in order to fashion a nice piece of progressive metal.
This disk ends with five live versions. These tracks, two of which appear on “Tangled In Dream” while the other three are from previous records, are performed entirely acoustically. And on these performances Vanishing Point remind the listeners how impressive and diverse their output can become. 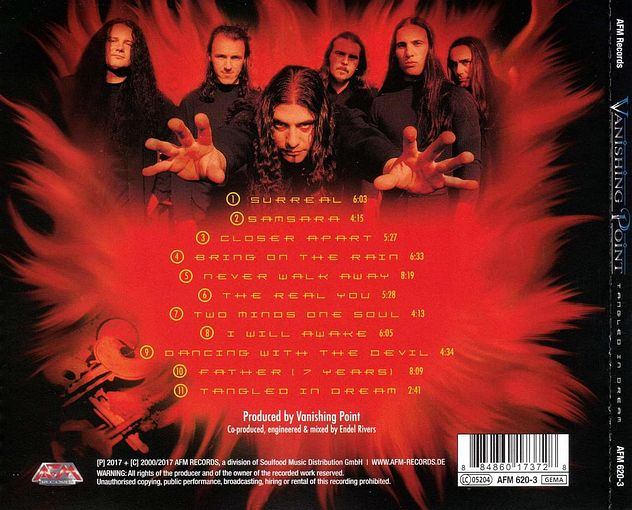 This double CD re-release is definitely a lengthy experience to have in one sitting, though there are enough bright moments to keep it from going stale.
Vanishing Point are not just a talented band, they’re a distinctly diverse quintet who are capable of changing their sounds in a multitude of ways to create imaginative forms of metal / hard rock.
Highly Recommended