Another pleasurable request to fulfill is this pretty hard to find ELECTRIC BOYS “Groovus Maximus remastered expanded reissue“. This rocking album remained out of print for many years and thanks to an association between Universal Music, Sweden Rock Magazine and the band it was remastered and expanded with 5 bonus tracks.

Sweden’s Electric Boys were one of the first and most celebrated purveyors of the short-lived funk metal phenomenon of the late ’80s and early ’90s.
The band had a considerable exposure with their 1990 debut album Funk-O-Metal Carpet Ride, which was released just in time for mainstream radio’s brief fascination with this sub genre in America by the hand of Extreme and alike.
So Electric Boys established in the US and toured extensively.

Songs like the killer title track ‘Groovus Maximus’ (pretty hair metal), the catchy ‘Knee Deep In You’ and ‘Tear it Up’ (both quite Aerosmith-like), the melodic hard rocker ‘The Sky Is Crying’, the groove-monster ‘Bad Motherfunker’ or the solid acoustic ballad ‘Bed Of Roses’ are among the highlights, but all the album is really good.
The bonus tracks are welcomed additions, especially ‘Love’s Kickin’ In’ and the excellent classy ballad ‘Dying To Be Loved’. 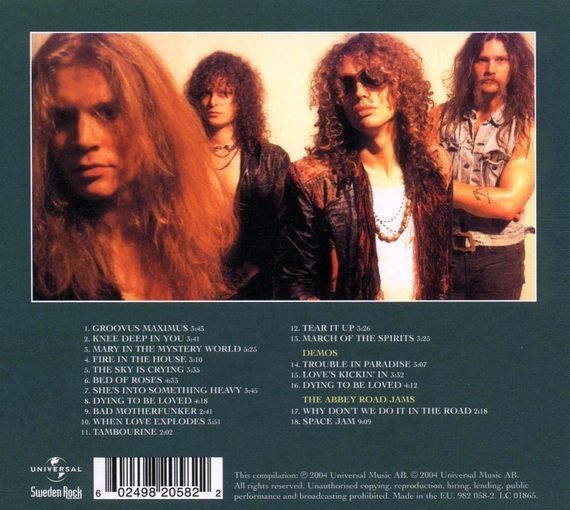 Since their origins in Sweden the quartet built quite a following in Europe, but why Electric Boys didn’t become huge in the US, especially with “Groovus Maximus”, is beyond me.
They toured the states alongside Mr. Big, Hardline and many more, the album sold pretty well, but major success never arrived. Bands playing similar music – read Extreme – galloped up the charts, and if you ask me, Electric Boys are on par or even better.