Yes, it finally happen; STATE OF SALAZAR‘s new album “Superhero” will appear tomorrow via Frontiers Music. When they unleashed their debut album in 2014, these Scandinavian melodic rockers released one of the year’s best albums. With some great choruses and tunes that often paid a massive homage to the mighty Toto, the band hit upon a classic retro style that really tapped into the Swedes’ knack for a melody.
The next couple of years came and went. The more time passed, the more it felt like there would never be a follow up. But “Superhero” is here.

A four year silence was finally broken in September 2018. First, the band announced they’d be appearing at the Frontiers Rock Sweden festival with label mates Eclipse and Crazy Lixx, but better still, a digital single ‘If You Wait For Me’ appeared on YouTube.
Not only were State Of Salazar back, but it seemed they were about to make a real impact within the AOR community.

‘If You Wait For Me’ is the opening track on the CD, and sums up the album perfectly. From its grandiose opening where a blanket of keys promises a huge pompy take on a classic sound, their commitment to the 80s is more than clear. By the time the main melody presents itself, a tune driven by muted guitar chords has a classic AOR sound with all the makings of one of State Of Salazar’s finest compositions. As the number progresses, various other influences are uncovered, but it’s a huge chorus that really sticks.
Marcus Nygren’s voice – as before – has a huge presence that takes a small amount of tuning in, but he’s well suited to this Scandinavian take on a US staple.
And that paves the way for the rest of the record – and “Superhero” is a disc packed full of great, fantastic songs.

With a world of harmonies and more than occasional nods to the likes of Aviator and Survivor, ‘Hold On Tonight’ opens with a spritely riff before dropping into a verse full of punchy rhythms and great vocals. With everything appropriated from 1983, State Of Salazar rarely sounded better. Nygren is in very confident voice, but for most fans, it’ll be the huge harmonies, a shamelessly retro keyboard solo and pomp-driven instrumental break that win out. In this love letter to a musical bygone age, the band really outshine most of their label mates and peers.

For those who loved the Toto inspired tracks from the debut, ‘Masquerade’ will certainly be an instant favorite with its David Paitch influenced stabbing keys, contrasting chunky guitar riff and chorus harmonies. The bulk of the number could’ve easily been lifted from the ‘Isolation’ album. With such a melodic backdrop, Nygren really excels in the vocal department, taking Toto-ish flourishes and injecting them with a rockier edge, but it’s guitarist Johan Thuresson and keysman Kevin Hosford who carry the weight and essentially make the track as brilliant as it is.
The guitar solo is beautifully played and at the point you might think it’ll be the number’s best feature, Kevin drops in with a rather cheeky piano solo taking influence from the Toto classic ‘Rosanna’ and completely steals the show. If you only need one reason to check out this CD, then this is most definitely it.

With a more buoyant quality, ‘Joanne’ is another sure fire favourite with the band taking on even more of those early ’80s Westcoast AOR elements from Maxus and Airplay, but once again recycling those much loved sounds with slightly chunkier guitars. Alongside ‘Masquerade’, this is a strong contender for ‘Superhero’s finest four minutes.

Next, ‘Someone I Know’ mixes pure AOR with a tiny bit of pomp to create a retro sound that showcases more fine guitar work, while a slightly bombastic vocal lends extra power. Much like ‘Joanne’, the band have fun with a backing vocal and while everything is purposely derivative of Toto and Airplay, it’s just as much fun for the listener. Sometimes over familiarity works towards the positive and that’s definitely true in this case.

Elsewhere, ‘Love Will Find A Way’ pays gentle tribute to FM radio with a softer melody, the massive ballad ‘Lie To Me’ pushes guest vocalist Kristina Talajic into the spotlight while State Of Salazar invoke their inner Steinman; ‘She’s a Loaded Gun’ seems fairly formulaic but wins out due to some classic sounding keys, huge chorus and occasional melodies that sound like an ’80s TV theme, and bringing purer AOR magic without necessarily breaking new ground for the band. 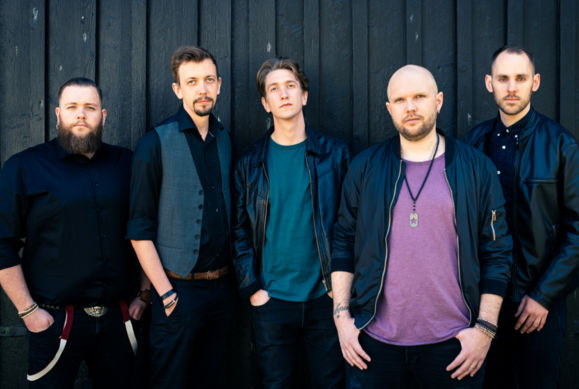 ‘To The Wire’ pleases with a hybrid sound that offers Toto’s early pomp with the smoothness of Pages. The tried and tested style provides a great base for guitar and keyboard solos and Kevin Hosford’s lead vocal spot is just terrific. Individually, these are solid soft rock tunes but when combined, each one adds a little flair to create a very consistent album.

State Of Salazar did it again: “Superhero” is a fan-damn-tastic classic AOR / Melodic Rock album: it’s got great songs, greater melodies and – just as importantly – a love for the ’80s that’s so deep you can’t help but get swept along.
For me, one of the best albums of the year.
HIGHLY RECOMMENDED