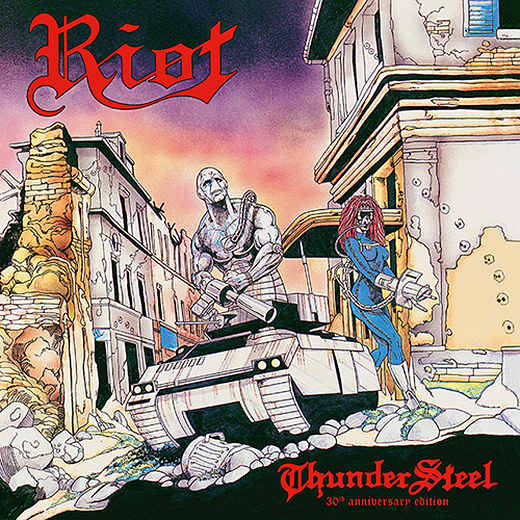 ‘ThunderSteel’, the sixth studio album by American cult legends RIOT is turning 30 this 2018, so Metal Blade Records are celebrating the event with a remastered reissue of the album plus bonus tracks titled “ThunderSteel [30th Anniversary Edition remastered +6]”. The very good quality digipak also houses a DVD with shows from the band.

Disbanded in 1984, at the second half of the Eighties Riot were in need of a comeback. The fans asked leader Mark Reale for it, to give the world a polite-but-firm reminder that earlier efforts weren’t just flukes, and that his intrepid cult following hadn’t started worshiping a golden calf.
Featuring a revamped lineup with the exception of mainstay Reale, the new Riot took a different direction; the original bluesy hard rock was changed in favor of classic US metal, quite technical yet always melodic.

“ThunderSteel” appeared in 1988, Riot surprised with a mix of Impelliteri, Steeler (Yngwie), Keel, Burning Star, etc, and even some Dio and Accept-like speedy riffs.
The title track is an absolute 95 MPH racing number with a terribly catchy riff. The solo is long in the classic US metal arena vein, the bass work by Don Van Stavern is notable as is the precision drumming by Bobby “The Zombie” Jarzombek – Mark Edwards of Steeler and Lion fame also play drums on several tracks.
Tony Moore’s voice soars high and clear over everything, a very ‘classic metal’ singer.

“Fight Or Fall” continues the frantic pace. “Fight or fall, in the name of the children, fight or fall in the name of us all” screams Moore, and he means it too.
The more moderated, Deep Purple-riff monster “Sign of the Crimson Storm” turn things more hard rock, but then you’ve got an anthem of rebellion and non-conformity at warp speed like “Johnny’s Back” in the running.
“Flight of the Warrior” has memorable ‘metal’ choruses and plenty of amazing lead work, while the heavy ballad “Bloodstreets” is a gem, including clean guitars into the mix and some Keel feeling.

“Run for your Life” is an upper mid-tempo crusher with tons of great lead guitar work, but it’s true charm is the chorus, which reminds me a bit of the high/low vocal interchanges that you hear on Dio’s early material.
“Buried Alive (The Tell Tale Heart)” is actually a bit reminiscent of Crimson Glory’s work on Transcendence, which came out the same year that this did. You’ve got a rather odd spoken intro with a clean and somber guitar line, followed by some brilliant twin guitar soloing and strong vocals.

As bonus tracks we have really interesting versions of “Bloodstreets (Alternative Ending Version)” and “Buried Alive (Tell Tale Heart) (Alternative Ending Version)”, very different. There’s also some live songs recorded ’88, not the best sound quality though.
So if you like your classic 80s US metal – with cheesy lyrics and one of the worst cover artwork in history – yet plenty awesome guitar solos / riffs and over the top vocals, this remastered reissue of Riot’s ‘ThunderSteel’ is a must.
Very nice packaging including full lyrics and rare photos.