A true super-group of sorts, MURDERER’S ROW recorded only one album, self-titled, in the mid-Nineties. Long time out of print now its being remastered & reissued as “Murderer’s Row [Expanded 2CD Edition], including a bonus disc of previously unreleased recordings.

Few rock musicians have a history as varied and impressive as influential lead guitarist Bob Kulick. In the 1970s Bob worked with KISS on “Alive II”, followed by “Unmasked” and “Killers”, as well as Paul Stanley’s 1978 solo LP.
Bob’s younger brother, Bruce Kulick, would go on to join KISS for a number of years. Bob also found time to play on Lou Reed’s “Coney Island Baby” (1975), Michael Bolton’s 1983 debut, WASP’s “The Crimson Idol” (1992) and “Still Not Black Enough” (1995), in addition to a long running collaboration with Meat Loaf, from touring the “Bat Out Of Hell” LP, through to 1987’s “Live at Wembley” album, and also two albums with AOR outfit Balance in the early ’80s.
In the ’90s he recorded with Blackthorne alongside former Rainbow vocalist Graham Bonnet, as well as the hard rock group, Skull, who released their sole LP, “No Bones About It” in 1991.

Which brings us to the short-lived “Murderer’s Row”, where Bob was joined by Jimmy Waldo on keyboards, who has had as varied a career as Kulick, having played with Alcatrazz, Blackthorne (alongside Kulick), Graham Bonnet Band, New England and Quiet Riot. 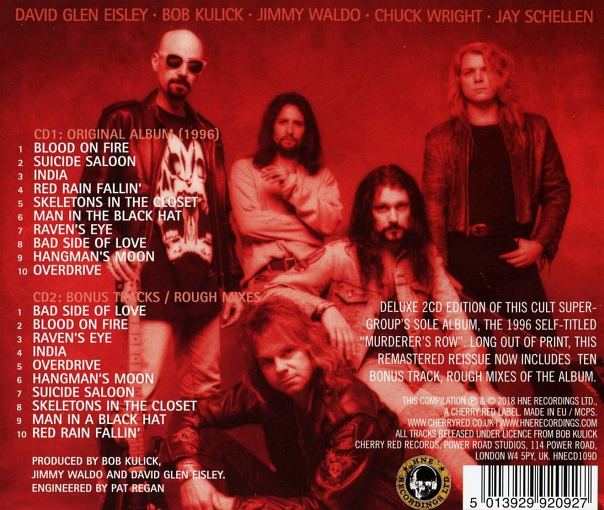 “Murderer’s Row” was fronted by David Glen Eisley, who had previously sung lead vocals for the bands Sorcery (1980-1983), Giuffria (1983–1988) and Dirty White Boy (1988–1991) before joining Bob and Jimmy in Murderer’s Row. Drummer Jay Schellen had played with Asia, Circa and Hurricane, with the line-up completed by bassist Chuck Wright (House Of Lords, Quiet Riot, and more).

Produced by Bob Kulick, Jimmy Waldo and David Glen Eisley, and engineered by Pat Regan (KISS, Quiet Riot), “Murderer’s Row” released a quite respectable, singular, self-titled album in 1996. It contained ten tracks of dynamic, hard-edged rock with solid musicianship and impressive playing.
This was dark ages for this type of rock music, and arguably, they deserve respect for not selling out. Plenty of bands did in favor to grunge.

However, the S/T album wasn’t officially released in some territories at that time, which means there are some folks that may have no clue that the band ever existed, let alone issued a record… but now this is solved with this very good remastered reissue by Cherry Records.
The bonus disc contains ten never-before-released ‘Rough Mixes’ – ones never even heard before, according to the band. Some versions are slightly different, especially the solos and some verses.

For this remastered reissue there was full involvement from band members Bob Kulick and David Glen Eisley, whom even shot a new video for the song ‘India’. When we say ‘new’, that is what we mean, as this clip was recently filmed for the song that is over 20 years old.
“Murderer’s Row” is an elaborated record, hard rock with essence that in many places reminds me of House Of Lords third album, plenty of strong songs and stupendous musicianship.
Highly Recommended