Already in 2014 the big series of remastered re-releases of all IRON MAIDEN albums from the debut album to The Final Frontier began and set the headbangers worldwide in motion. After the 2014 / 2017 releases on black vinyl and the Mastered for iTunes project in 2017, Parlophone Records are now setting the series of IRON MAIDEN catalogue reissues in motion with a further project continues.
This November 2018 the release of all 16 IRON MAIDEN Remasters starts as CDs in Digipak and with the original track-listings of the UK versions. This is The Studio Collection Limited Edition Box housing all 4 Digipak.

The albums will be released over a period of 9 months in chronological order in groups of 4 albums each, replacing the previous versions on sale.
As a collector’s bonus, one album per group of four will optionally be released with a special artwork and will include a 1:24 scale figure with stand. In the first group, just released, it’s The Number Of The Beast with a figure of band mascot Eddie.

So we have here “Iron Maiden”, “Invaders”, “The Number Of The Beast”, and “Piece Of Mind”, all in high quality Digipak featuring the track listing of the original U.K. releases and replicating the original booklets with lyrics.

Of course, this means that “Total Eclipse” will be excluded from The Number of the Beast. The song was inserted into the track listing on the 1998 reissue, as the song was originally omitted from the album after the band elected to use the track as the B-side to the “Run to the Hills” single. The band has expressed regret for choosing “Total Eclipse” as the B-side instead of “Gangland,” which made the album cut. 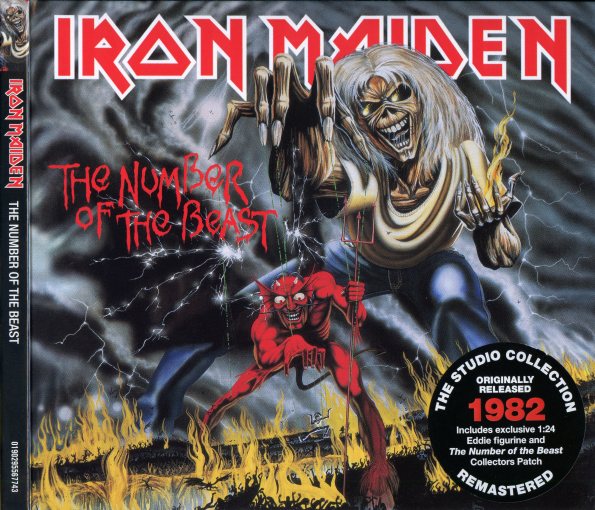 The Book of Souls, which was released in 2015, is the only record to not receive a remaster and will appear in its original form upon re-release. The next batch of 4 discs will be announced soon.
As said, the quality packing is top notch, and so the remastered sound.

Piece Of Mind (Remastered):
1.Where Eagles Dare
2.Revelations
3.Flight Of Icarus
4.Die With Your Boots On
5.The Trooper
6.Still Life
7.Quest For Fire
8.Sun And Steel
9.To Tame A Land