This one was requested by one of you after the recent GRAND DESIGN album: few people know they ‘remastered / remixed‘ the first album Time Elevation, now re-titled “Time Elevation (Re-Elevated)”, including a bonus track and new artwork.
Released a couple years ago, this limited edition (500 copies) is out of print now.

Grand Design is the creation of Pelle Saether’s musical imagination. Pelle is the ex- Schizophrenic Circus vocalist, producer / engineer and a musician in love with classic melodic rock / AOR.
Strongly influenced by Def Leppard, ‘Time Elevation’ was Grand Design debut, a lovely of a time when music was big, musician’s hair was bigger and production budgets were bloody enormous.

Bringing together Wolf’s drummer Richard Holmgren and ex-Vanessa guitarist Peter Ledin, this core trio of musicians started writing songs with the word ‘anthems’ firmly in the forefront of their minds, and it is on anthems like ‘Air It Out’, ‘Hello Mr Heartache’ and album opener ‘Love Sensation’ that the enormity of the band’s sound and the overall production values really hit home.
Add in bass from Anders Modd and extra guitars from ex-Steel Attack man Dennis Vestman to the mix and things really start to shine.

‘Sad Sound Of Goodbye’ is built around a refrain not a million miles away from one of a certain band from Sheffield’s finer moments, and ‘No Time For Love’ has Steve ‘Steamin’ Clark’s signature guitar sound down to a tea.

At certain times, Pelle’s voice enters Hamie from Heavy Pettin’ territory, another band that heavily influenced Grand Design style.
Tthis is the sound of five guys doing what they love, producing huge swathes of Eighties arena rock that when it’s as good as tracks like ‘Piece Of The Action’ and ‘Sheik Iddup’ you can’t help but smile from ear to ear.

This “Time Elevation (Re-Elevated)” re-work is really welcomed.
Being the band’s first album there were some flaws. As example, the remix makes everything sound more glued, and some ‘tape hiss’ or something like that at some intros were cleaned. 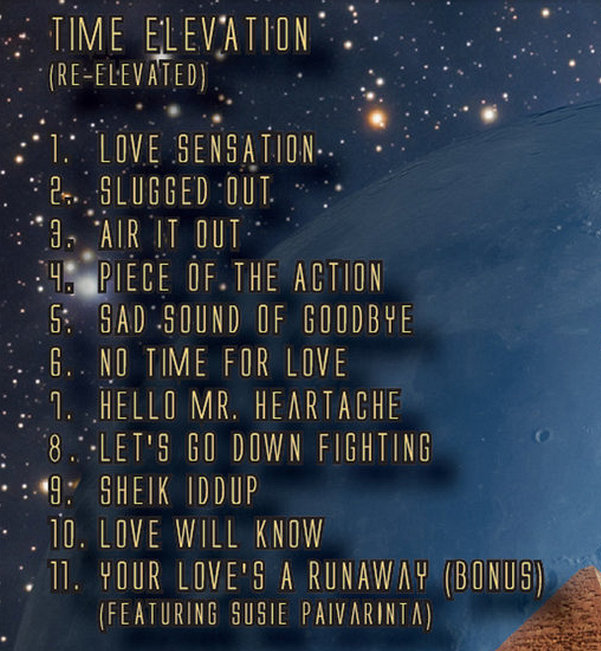 If you are a fan of Eighties arena rock / melodic rock / AOR, this album sets the benchmark for bands playing it in the 21st Century. And if somewhere in your album collection you happen to posses a copy of Def Leppard’s ‘Hysteria’, I can assure you, that you really will love “Time Elevation (Re-Elevated)”.
A Must