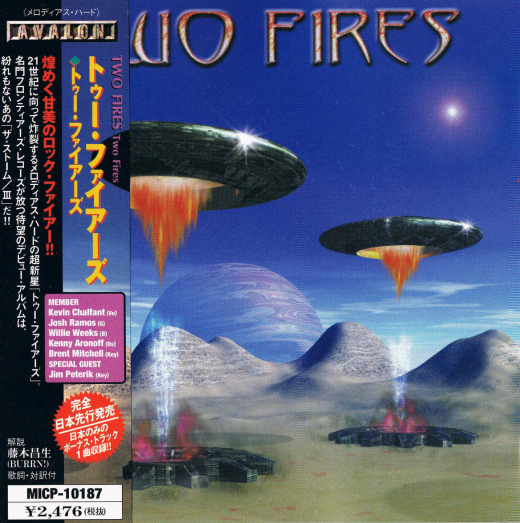 Requested by one of you it’s a real pleasure to feature here TWO FIRES eponymous debut album “Two Fires”. Never has been remastered but this Japanese Edition including a bonus track is out of print for years.
Two Fires is the band made up of remaining two members from the awesome AOR band The Storm: superb vocalist Kevin Chalfant and terrific guitarist Josh Ramos.

After The Storm second album ‘Eye Of The Storm’ – a masterpiece in my opinion – the group fell apart. By the time Kevin Chalfant set up for the third album, Ross Valory rejoined Journey and Gregg Rolie left the band to pursue his latin / bluesy flavored music.

But Kevin and Ramos keep writing new songs, and with the help of outstanding session musicians like drummer Kenny Aronoff and Jim Peterik, they created Two Fires.
The band’s debut album, released in June 2000 is still one of the biggest successes ever from the Melodic Rock / AOR ‘resurgence’, scoring huge interest from the fans and the press.

The band appeared on the cover of the ROCK IT magazine in Germany and ROCK TIME in France plus their live appearances at THE GODS festival in 1999 and 2000 are written in stone as some of the most exciting moments in the history of the festival, ever.

The album sounds as ‘The Storm updated’, with more than a hint to classic ’80s Journey; just check the lead-off track ‘My Love Will Be There’ and the Jim Peterik-written, ‘River of Destiny’, a real highlight.
I love the awesome summertime feel-good track ‘Summer of Love’ and the splendid AOR ballad ‘I Believe in You’, while for more rocking stuff ‘Alyssia’ does the trick. The atmosphere on ‘I Believe in You’ is to die for, including a superb guitar solo.