Hardline, Axel Rudi Pell and Gioeli-Castronovo lead vocalist JOHNNY GIOELI will be releasing his first solo album titled “One Voice” via Frontiers Music on December 7, 2018. Tomorrow the album appears in Japan with a bonus track.
One of the most iconic voices in Hard Rock from last thirty five years, it was time for Gioeli to have his well deserved solo album. The man CAN SING.

For this recording Gioeli gathered some well-known musicians such as Eric Gadrix on guitars, Nik Mazzucconi on bass, Marco Di Salvia on drums and the ‘mighty’ Alessandro Del Vecchio on keyboards and created a damn fine melodic rock album sure to please each and every single fan of this scene.

The opening tune of “Drive” is pure melodic rock bliss of the highest order. In the vein of the recent Gioeli -Castronovo album, the sound from this track is pure ear candy. Melodic as it gets with a great chorus line “Drive” sounds like the perfect opener of what’s to follow next.
“It” is yet another solid song, more laid-back but with its cool rhythm grabs you with the first listen.

The mid-tempo title rack “One Voice” and the classic rocker of “Running” are both a great showcase for Johnny’s unlimited pipes. The voice of Gioeli really shines in both tracks and you can hear the emotional side of this exceptional singer.
In “Hit Me Once, Hit Ya Twice” we are dealing with a harder edged, modern track. This one kinda reminds me of Hardline’s “II” era. It also includes a damn nice guitar solo in it.
Another highlight out of this debut is the Hardline-esque “Out Of Here”, dynamic and catchy. 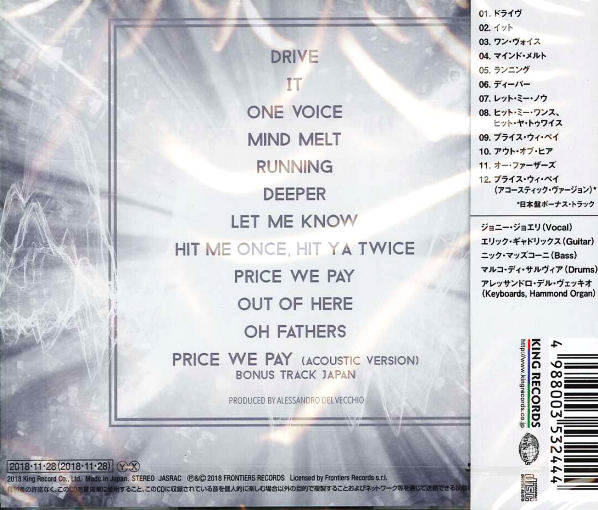 The fact that Mr. Johnny Gioeli has one of the best voices out there is already well-known. The fact that with Hardline and Axel Rudi Pell he has released some killer records is also well-known.
“One Voice” packs some of these, of course, but variation as well. And fortunately, Del Vecchio’s production isn’t generic, nor ‘encapsulated’, giving Gioeli’s vocals enough room to shine.
HIGHLY Recommended