Featured in exclusive at 0dayrox, this is fresh remastered version from the original tapes of “Freight Train Heart”, the third studio album by Australian singer JIMMY BARNES, released in late 1987 in Australia by Mushroom Records and in early 1988 in the United States by Geffen.

This is a terrific ’80s production where most of the tracks were written by Barnes and Journey’s talented ivory man Jonathan Cain, who also produced the album.
But there’s more top contributions, such as the AOR tune “Waitin’ for the Heartache” co-penned by Desmond Child, and “Walk On”, co-written by Child and the mighty Joe Lynn Turner.
Additionally, session musicians include Neal Schon, Randy Jackson, Cain itself, and many more.

“Seven Days” was a Ronnie Wood track originally written for him by Bob Dylan, re-worked here with a melodic rock approach and that unrepeatable ’80s feel. This was the last song recorded for the album, and features INXS drummer Jon Farriss, bassist Chris Bailey and Rick Brewster from The Angels.

Brewster, Johnny Diesel, Peter Kekell and The Angels’ Jim Hilbun were all hired after Barnes returned with the uncompleted master tapes from the initial recording sessions at the Power Station in New York City.

The album was completed at Rhinoceros Studios in Sydney with legend Mike Stone co-producing.
Interestingly, the album spawned Jimmy’s only-ever Top-40 single, the aforementioned ‘Too Much Ain’t Enough Love’, but while this is a very good track, the ‘inside tracks’ are the real meldic rock gems of this uber polished, slick collection of songs. 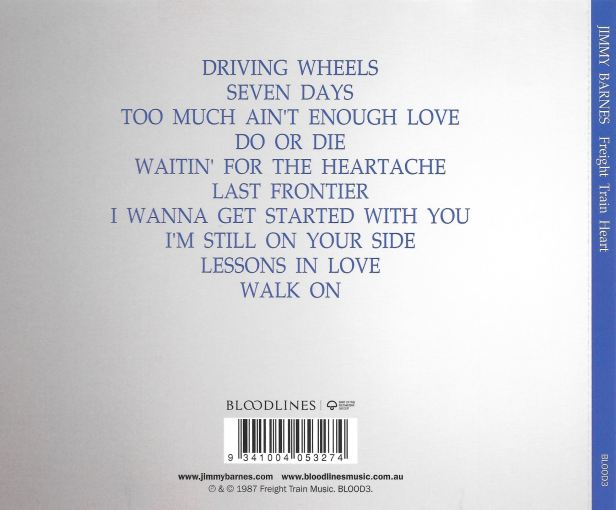 “Freight Train Heart” has been totally remastered by Don Bartley who undertook an exhaustive analogue process including the use of 1/2″ tape to keep dynamics and clarity intact, maintain the punch of the original mixes and create some natural harmonics while still allowing for competitive levels.
I love this album.
Highly Recommended