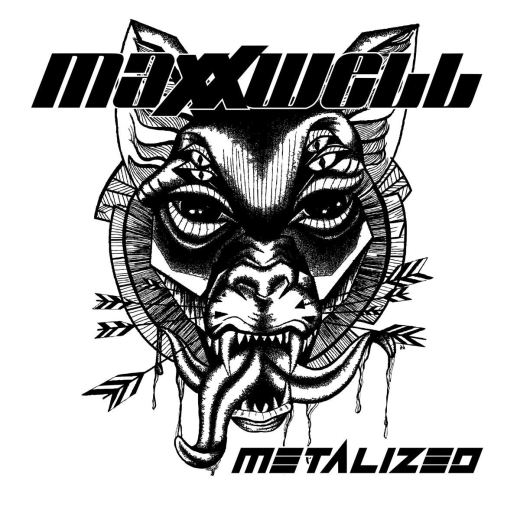 Swiss hard rock / metal band MAXXWELL will release of their fourth album “Metalized” on September 21, 2018. Its title says it all – on the new record, the band rocks harder, and a lot more edgier than on their earlier releases.
At this time and age, we can say there’s a typical sound of ‘rock made in Switzerland’; Krokus, Gotthard, Shakra… add Maxxwell to the list.

What bands such as AC/DC, Dio, Iron Maiden, Judas Priest, Megadeth and W.A.S.P. all have in common? Well, apart from the obvious answer that they are all legends within the worldwide heavy metal / hard rock scene and are icons for many, they are also just a few of the bands whose song titles feature as lyrics for the song ‘Metalized’. A song that is highly infectious and features some of the best Accept-like riffage I’ve heard for some time.
For those of us who are a massive Eighties metal-related fan, every featured song title lyric will be instantly recognizable…

As for the rest of the album, it’s full of punch, beef, and heavy hitting metal rock, hard ‘n heavy jam packed with pounding riffs and thunderous rhythms.
Maxxwell deliver some outstanding hard rocking party anthems, every single one catchy and sing a long. Opening with the intense in your face belter ‘Hurricane’, Maxxwell set their stall out from the off.
Power, purpose and pace, ‘Hurricane’ is a pulsating and throbbing sonic assault. ‘Back Again’ quickly follows, heavier yet a little more melodic, your feet will be stomping hard to this one, as you sing the chorus at the top of your voice.

An outstanding opening double shot just gets better with the up tempo and lively ‘P.U.T.V.’. Full of energy and bombast, ‘P.U.T.V.’ (standing for “pump up the volume”) is a kick ass, fast paced, hard rocking gem.
The punchiness reaches an all time high with ‘She’s Mine’. Heavyweight boxers are known for their powerful punching ability, but even the best heavyweights cannot match the power of this one.

Just where do Maxxwell get their heaviness from? Who knows, but they have an endless supply of it as the album moves on with ‘Scars’. Dipping into power ballad territory, ‘Scars’ is more mellow than anything else on offer, yet maintains the albums overall beefy stance.
And talking of beef, what a song ‘Monsterball’ is… thunderous, pulsating and kicking harder than a UFC martial arts champion, ‘Monsterball’ is (literally) a monster of a song and is a definite favorite of mine on the album.

Singalong ability is one hundred percent, as it has been all through the album so far, and as ‘Burn’ lurches forward, there is no sign of it letting up either. ‘Burn’ brings a shuddering vibe to the album and is a mid tempo heavy stomper. The chorus is an anthemic chant style one, and in a live arena the entire crowd will all be shouting “burn” at the tops of their voices.
With a more menacing vocal delivery, ‘Done With You’ is a much more darker song than what has gone before, yet maintains the album’s overall catchiness. 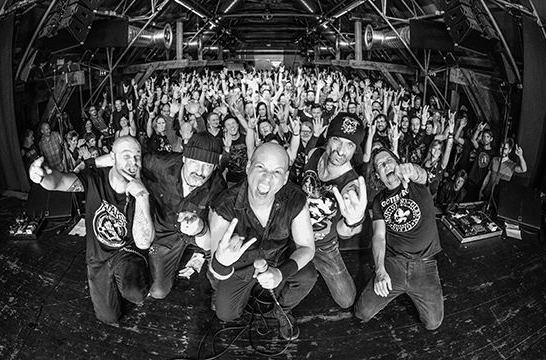 ‘Given It All’ strides majestically along the border of power ballad territory, not quite crossing over it, but as near as you can possibly get.
The energy levels rocket skywards as ‘The Temple’ bursts into life, and is a rampant rampage of raucous riffs, with the most infectious sing a long style chorus.
What must become a metal anthem brings the curtain down on an exhilarating listen…’Raise Your Fist’ is everything you could ever ask for in a rabble rousing anthem, with pace, power and energy in abundance.

There’s 3 bonus tracks in this album version, all in the same quality, being ‘Queen Of The Night’ my favorite, a midtempo catchy melodic hard rocker with an ’80s feel
Overall, a beefy, heavy hitting slab of hard n’ heavy made with Swiss precision, “Metalized” is a rampaging monster of an album, stacked full of hard rocking and anthemic metallic songs.
Highly Recommended