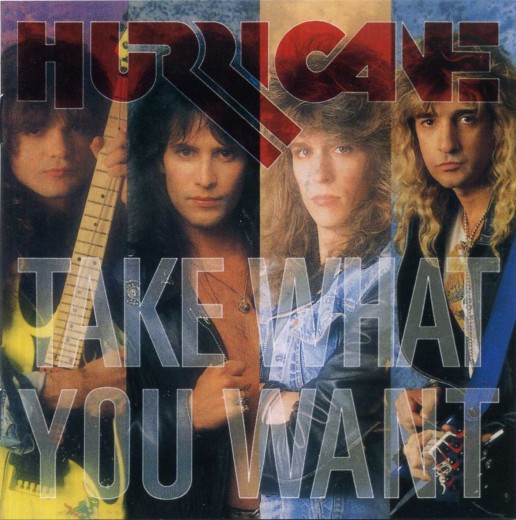 An here continue the request fulfill of HURRICANE remastered discography, one of the greatest melodic hard rock bands of the ’80s. We already featured here a remaster of Hurricane’s first album “Take What You Want”, here’s a different remastering job / release done by Enigma Records / NL, which in fact is a YesterRock remastering production.

Indeed, this remaster of “Take What You Want” was done by Tony Übler from YesterRock headquarters, and it’s a quite different release.
First of all the artwork is completely different, but also the bonus tracks running order, there’s other version of ‘Baby Snakes (Instrumental Version)’ which has a full-on instrumentation instead of the ‘spoken-word’, and most importantly, the overall sound.

For those of you that haven’t heard Hurricane before (although you may remember “I’m on to You, Na na na na na na”) they have the same vibe going on as Y&T (and to a lesser extent later era Whitesnake). Both bands play a melodic and classy version of hard rock, as both groups are fronted by vocalists with silky smooth voices, guys who actually sing!
However, Hurricane is more melodic hard overall, with a hair metal touch without being cheesy.

Aside from the infectiously simple chorus to their biggest single, the aforementioned, ‘I’m On To You’, Hurricane was best known for its members Robert Sarzo (guitar) and Tony Cavazo (bass) more famous siblings (Carlos Cavazo and Rudy Sarzo).
But the band also featured incredible vocalist Kelly Hansen (current Foreigner frontman), and future Unruly Child / Asia drummer Jay Schellen.
To write the band off for that simple reason would be selling Hurricane short however, as some of the songs included here could rival that of either Quiet Riot or Whitesnake.

They hit you from the start with the one-two punch of ‘Take Me In Your Arms’ and ‘The Girls are Out Tonight’. Two rockers you can’t help but bang your head to.
Then we have the awesome midtempo AORish ‘Take What You Want’, a classic. Next the track ‘Hurricane’ is highly melodic yet rocking as hell, the power ballad ‘It’s Only Heaven’ is strong & meaty, and the fast rocker ‘Hot and Heavy’ is the kind of a song that I just love to sing along to.

As bonus there’s ‘that song’; ‘I’m On To You’, Hurricane’s greatest hit. This is NOT the version appeared on their second album, it’s the rare ‘Super Stormin’ Hook Edit’, and one to treasure.
The other extras are the interesting aforementioned ‘Baby Snakes’, and ‘L.A. Luna’, plus the killer midtempo ‘Over The Edge’ (titled here as originally was; ‘Livin’ Over The Edge’) in its single version, another highly melodic rocker with a wonderful chorus. This is the early recording of this song, not the one re-made later.

As said, this “Take What You Want” Enigma / NL / Yersterrock remastered reissue is quite different from the Caroline Records remaster previously featured at this blog.
The overall feel on this Tony Übler is less bright then the Caroline, giving more room to the guitars to breathe. Additionally, on some tracks I hear a different cymbal dynamics.
To make it clear, this is an ‘old-school’ type of remaster, and works great for Hurricane’s style.

But 0dayrox always give you somethin’ extra. As bonus we added 3 tracks from the album performed live at at The Palace, Hollywood, 1990.
These are, of course, unreleased, and taken from a radio broadcast of the era, provided by a 0dayrox friend collector. The sound quality is very good, a cool showcase of how good Hurricane sounded live as well.
HIGHLY RECOMMENDED