Frontiers Music will release the self-titled debut album from GROUNDBREAKER, the new project featuring singer Steve Overland of FM and Robert Säll of WORK OF ART / W.E.T., on September 14. Tomorrow is appearing in Japan, with a bonus track.
“Groundbreaker” is simply everything that a melodic rock fan could hope for: soaring hooklines, magnificent melodies, amazing musical performances, and in Overland, a stunning vocalist.

GROUNDBREAKER came about when a conversation between Frontiers and Overland revealed that the latter was eager to collaborate with new and exciting musicians from the European melodic rock scene.
The idea was immediately brought up to involve Säll and use Alessandro Del Vecchio’s production abilities. Overland loved the initial material that was submitted, and consequently they all started to work on songs.
The process was very smooth and the final result was so good that everyone thought that the name GROUNDBREAKER was the right way to describe the power and the vibe of the music.

But we are talking about Melodic Rock power here, and heck, these are indeed strong songs to boot.
Take as example opener ‘Over My Shoulder’: it mixes the ‘smooth British’ Steve Overland phrasing with the elegant ‘Swedish touch’ of Robert Sall, which is, of course, reminiscent of Work Of Art.
There’s an anthemic melodic rocker in ‘Will It Make You Love Me’ (akin FM circa 1989), a sweet AOR melody on ‘Eighteen Til I Die’ (brings to mind some STRANGEWAYS), then ‘Tonight’ is pure poppy AOR midtempo heaven. 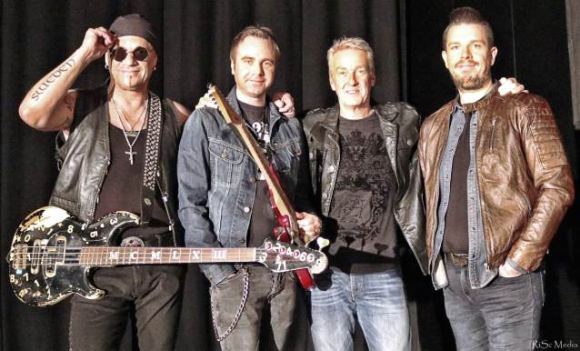 One of my favorites is ‘Standing Up For Love’ which somehow I found similar to a Mark / Marcie FREE solo song, and if you like ’80s ALIAS (who doesn’t?), then power ballad ‘Something Worth Fighting For’ is for you.
A classy keyboard / synth line opens ‘The Sound Of A Broken Heart’, a true ’80s inspired number all over (great one), while ‘The First Time’ has a SIGNAL stamp, and I love it for sure.

‘The Days Of Our Life’ bring back uptempo melodic rock with a terrific chorus, and the album ends in top form with the keyboard driven ‘The Way It Goes’, crafted in a midtempo mode and crowned by a sweet chorus.
The Japan Bonus Track is a stripped take on ‘Something Worth Fighting For (Acoustic)’, where piano takes a center role, and you can hear Overland’s voice on top. A worthwhile version for sure.

Mixing the British and Swedish melodic rock / AOR styles, “Groundbreaker” is truly the best of both worlds and surely destined to be one of the highlights of the year, in an already stellar year for melodic rock / AOR.
A serious contender for the ‘Album Of The Year’ prize, and A MUST for lovers of the classy sounds from the genre.