We already presented here the last album from BLACKFIELD. the collaboration between songwriter / musician Aviv Geffen and British Prog genius Steven Wilson. The collaboration, extending from their self-titled debut in 2004 to their superb return with album ‘V’ produced with Alan Parsons in 2017, has proven to be a prolific partnership for creating striking and affecting music.
So it was time for “Open Mind ; The Best Of Blackfield”, including the best from their 5 albums, a great starting point to discover this charming project, or if you already know them, to get 15 tracks among their best.

The pair makes for a formidable musical force; Geffen has worked with legendary producers Tony Visconti and Trevor Horn, has also recently performed with and hosted Jake Bugg, played as support for Biffy Clyro, and was a judge on the Israeli TV show The Voice.
Wilson, after a long tenure as the leader of the hugely influential band Porcupine Tree, has since embarked on a highly successful solo career, most recently earning a #3 album in the UK Charts and #2 in the DE Charts, as well 4 Grammy nominations.

This “Open Mind ; The Best Of Blackfield” collection, curated by Wilson and Geffen, selects the best works from an impressively rich Blackfield catalogue with each of the five records combining both sweet and tart elements.
Steven Wilson daud; “Blackfield appealed to me because it was a chance to focus firmly on the art of the classic pop song with concise songs and strong melodies, harmonies, orchestration, and a very lush ‘golden’ production.”

So this is Rock&pop material, elaborated, a places exquisite.
Among the highlights there’s opener ‘Blackfield’, the uber-smooth and emotive ‘1000 People’, the energetic and dynamic ‘Oxygen’, and one of my favorites favourite ‘How Was Your Ride’ with its surfeit of soul and oh so cool strings and vocals. 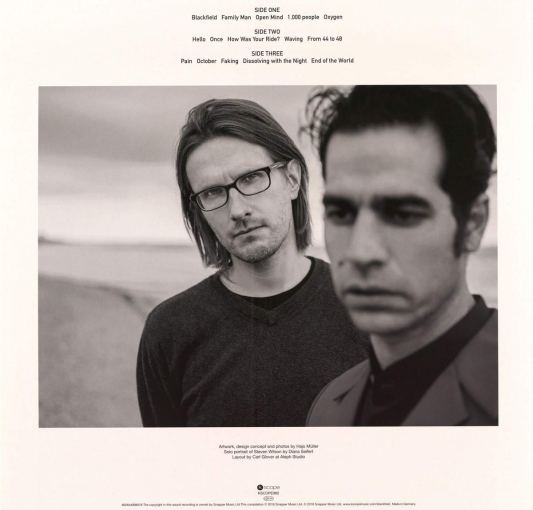 Also to mention are the solid melody of ‘From 44 to 48’, the heartfelt ‘Faking’, the pared back brilliance of ‘Dissolving With the Night’… honestly, as collections go, it really doesn’t get much better than this.
Blackfield has the power to appeal all audiences, some kind of a timeless rock&pop with nice melodies and top notch production.
Highly Recommended