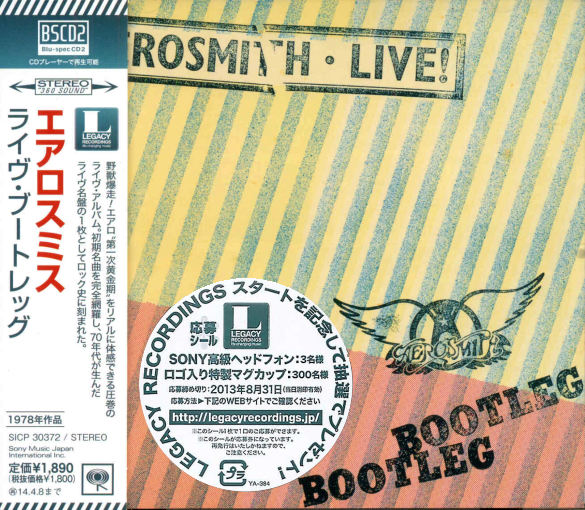 One of you asked for the best sounding-reissue AEROSMITH albums, especially from the first era. Now here’s “Live! Bootleg”, recorded with the band at their peak, pretty improved in this remastered Japanese Blu-Spec CD2 release.

Since Aerosmith had become one of America’s premier rock n’ roll concert attractions by 1978, it was only natural that an in-concert collection was issued that year, the double album, “Live! Bootleg”.
Unlike other live albums at the time, it’s obvious that not a lot of overdubbing was involved to fix up the tracks, which results in a refreshingly authentic representation of Aerosmith at the group’s most drugged-out and rocking.

All of the performances were taken from Tyler and company’s 1977-1978 U.S. tour (with the exception of a couple from 1973), while the album’s packaging and title were a joke on all the poor-sounding, unauthorized live recordings that were in circulation at the time.

Just about every classic is included — “Back in the Saddle,” “Sweet Emotion,” “Walk This Way,” “Come Together,” “Last Child,” “Mama Kin,” a much heavier version of “Toys In The Attic” — as well as key album tracks (“Sick as a Dog,” “S.O.S.,” etc.).
But the album’s high point has to be the aforementioned pair of long-lost tracks from 1973 — loose and groovy covers of the Yardbirds’ “I Ain’t Got You”, and James Brown’s “Mother Popcorn.”

To tie in with the careless ‘bootleg theme’ of the album, the track “Draw the Line” is unlisted, but it’s present after “Mother Popcorn.”
This remaster keeps the ‘raw feel’ of the original recording, which I celebrate.
Highly Recommended