Requested by one of you, here’s the really good SAMMY HAGAR album “Three Rock Box“, in its pristine Japanese remastered edition pressed on high quality SHM-CD, now out of print.
Sammy Hagar hit a nerve with his previous LP, and this follow-up “Three Lock Box” would prove not only that its predecessor wasn’t a fluke, but that the Red Rocker was in a legitimate groove when the album was released on Nov. 30, 1982.

According to Hagar himself, “Three Lock Box” is one of his favorite solo albums. Working with skilled producer Keith Olsen, this new effort was surrounded by a lush sound design, and collaborations from renowned AOR musicians such as Loverboy’s Mike Reno, Journey’s Jonathan Cain and future Mr. Mister’s Richard Page and Giant’s Alan Pasqua, among others.

While still guitar driven, his testing of the musical waters of the era worked very well.
The synth-heavy single “Your Love Is Driving Me Crazy” remains Hagar’s only Top 20 hit, reaching No. 13 on the Billboard Hot 100. There’s also the veterans anthem “Remember the Heroes,” which features vocals by Loverboy singer Mike Reno.

But the catchy title track “Three Lock Box” created the most debate, with fans thinking the often lyrically provocative singer was referencing something sexual. From day one, though, Hagar defended the song, claiming it had a much deeper meaning than it was credit for.
In fact, int the song he’s talking about spirit, the mental and the physical nature of a human being. It showed a deeper side of Hagar, one he would explore more in both future solo outings and when he took over as Van Halen’s singer in 1985.

There were still other early indicators on Three Lock Box’s deeper cuts, like “I Wouldn’t Change a Thing” (some Loverboy here), the guitar driven “Growing Up”, and the dark and moody slant of “In the Room”, musically an intriguing midtempo with a unique atmosphere.
There’s a melodic sweet line in “Never Give Up”, while the album ends in high note with the hot rocker “I Don’t Need Love”. 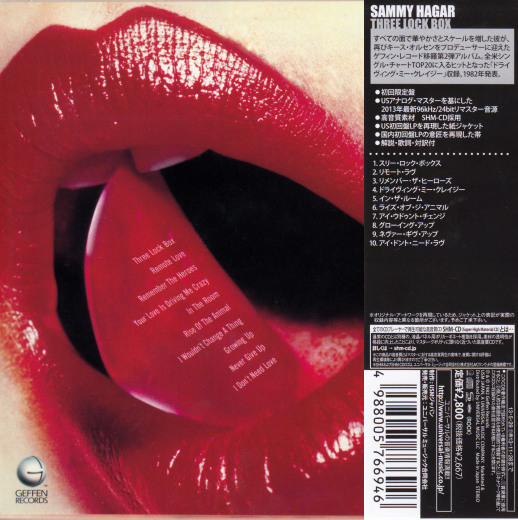