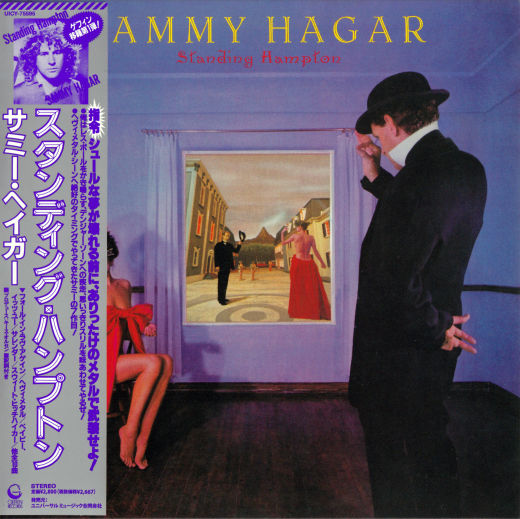 Requested by one of you, here’s “Standing Hampton“, another SAMMY HAGAR album in its pristine Japanese remastered edition pressed on high quality SHM-CD, now out of print.
“Standing Hampton” is Hagar’s first album for Geffen Records, and some kind of breakthrough for his solo career achieving RIAA certification eventually going platinum, and five of its singles charted in either the mainstream rock or pop singles charts.

Produced by expert Keith Olsen, the first half of “Standing Hampton” is an incredible 21 minutes of rock and roll to feed both your brain and your adrenaline.
Here’s “There’s Only One Way to Rock”, who went on to be one of Hagar’s biggest solo hits and a signature tune, one of the few from his solo era that Van Halen consistently played when he joined the band.
“I’ll Fall In Love Again” is a highly melodic midtempo opener with great harmony vocals and solid lyrics, then ‘Baby’s On Fire’ is a bluesy arena rocker.

“Can’t Get Loose” add synths to its catchy rhythm, one of those songs that apart from Sammy’s unmistakable vocal tone you can say ‘it’s a Hagar song’ even not knowing which record is playing in your stereo.
Next is another trademark Hagar track, “Heavy Metal”, a different version of the song used for the soundtrack for the iconic animated movie of the same name.

“Baby, It’s You” is a nice slow ‘red rocker’, we find a more poppy number in “Surrender” (written by Chas Sanford), there’s an FM radio tune in “Inside Lookin’ In” (it always reminded me of Foreigner), and “Sweet Hitchhiker” rocks with a stinging riff.
Closer “Piece Of My Heart” is a cover of the song made famous by Big Brother and the Holding Company featuring Janis Joplin, here Sammy adding a rock n’ roll infuse to it.

“Standing Hampton”, originally released in the first days of 1982, in terms of its production sound and arrangements, was a high point in the development of the upcoming heavy metal / hard rock wave in America.
Indeed, easily you can say it was recorded in 1984-85, a rocking and at the same time melodic album, in this excellent SHM-CD pressing sounding like never before.
Highly Recommended