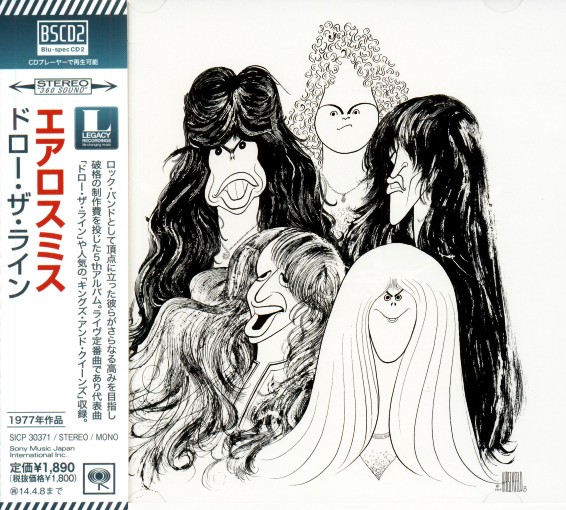 One of you asked for the best sounding-reissue AEROSMITH albums, especially from the first era. Now here’s “Draw The Line”, and I think this recent Japanese release on Blu-Spec CD2, remastered, is the best you can get.

In 1977, Aerosmith’s released their fifth album “Draw The Line”. The title track and “Kings and Queens” are among my favorite Aerosmith songs ever. Both charted and the album went on to sell two million copies.
The band toured extensively in support of the album, but drug abuse and the fast-paced life of touring and recording began affecting their performances. Tyler and Perry became known as “the Toxic Twins” due to their notorious abuse of drugs on and off the stage.

The title track is classic Aerosmith, and has figured prominently in their live set ever since. “I Wanna Know Why,” “Get It Up” and “Sight for Sore Eyes,” all featured important elements of the classic sound of the band, while “Critical Mass”, with its bizarre harmonica parts, adds a different touch to the regular Aerosmith rocker.

Despite rock critics gave a bad rating overall, the album was commercially successful upon its release, going platinum and eventually being certified double platinum. “Draw The Line” it isn’t the strongest Aerosmith album, but it rocks greatly.
This Japanese release features its Nineties remastering (the only done), old school sonic treatment but good, enhanced by this Blu-Spec CD2 format.
Strongly Recommended