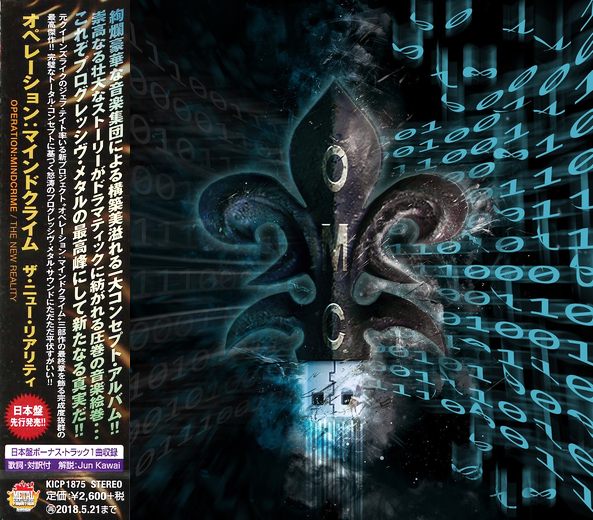 OPERATION: MINDCRIME, the band led by former QUEENSRYCHE singer Geoff Tate, will release “A New Reality“, the third and final of a concept album trilogy exploring international politics, the world economy and social ethos, on December 1 via Frontiers Music Srl. The Japanese Edition will see the light tomorrow, November 22.

The first thing I noticed most on this new album is Geoff Tate’s confidence at the mic. Sure, he can’t reach the high notes of the past, but I don’t think this is the focus here.
You know, this is not Geoff ‘and the band’, OPERATION MINDCRIME is aimed to an organic sound and that’s the reason such respected musicians like Simon Wright or Brian Tichy are part of it.

This is a concept album / band, and apart from the lyrical content, it’s musically conceptual as well. This mean different atmospheres, tempo shifts, vocal tone, etc.
The entire album works better if listened as a whole, but if I have to mention ‘separate tracks’, then ‘Under Control’ is one of my favorites with a classy QUEENSRYCHE felling.
There’s some amazing drumming on ‘It Was Always You’, and very good vocals on ‘All For What?’ in its dark atmosphere.

OPERATION MINDCRIME is a creative platform that continues in the spirit of the historic album of the same name, spawning concepts as grand as the music, and intertwining the intensity of the former QUEENSRYCHE vocalist’s iconic past with the provocative, progressive mindset that has made him one of music’s most resolute forces and frontmen.

Joined by a cast of stellar musicians, Kelly Gray, John Moyer, Simon Wright, Scott Mercado, Scott Moughton, Brian Tichy, and Mike Ferguson, whose talent and resumes speak volumes for the quality of musicianship that will be on display here, “The New Reality” is a another strong progressive hard rock / metal entry from Tate.