JIM FOSTER‘s “Power Lines” is one of those long-lost forgotten ’80s albums fortunately remastered & pressed on CD for the first time by Yesterrock Records.
This Canadian vocalist became popular during the late ’70s and early ’80s fronting his band Fosterchild which released a bunch of lovely FM AOR albums. After the group split, Jim Foster began to work on this, his first solo album “Power Lines”.

Fosterchild disbanded circa 1982, and founder member Jim Foster become artistic producer.
In 1985 Jim signed a contract with RCA and with the help of renowned Canadian musicians like Paul Hyde, Marc LaFrance (Loverboy), Dave Pickell (Bryan Adams, Glass Tiger), Doug Edwards (Paul Janz, First Shot), Daryl Burgess (Diamond In The Rough) and many more recorded “Power Lines”.
The album reached the top-10 in the UK and the single ‘X-Ray Eyes’ worked its way up to the top-30 in the US.

Musically, “Power Lines” range from rockin’ AOR tunes like ‘It’s Up To You’, ‘Where Were You’ (my favorite song) or the midtempo ‘Maggie’, to catchy melodic rock tunes like ”Quicker Than The Eye’ or the energetic opener ‘Dancin’ On The Power Lines’.
Production is bright with a sound in the vein of Rick Springfield, Stan Meissner with a bit of good old Loverboy thrown into the mix as well. 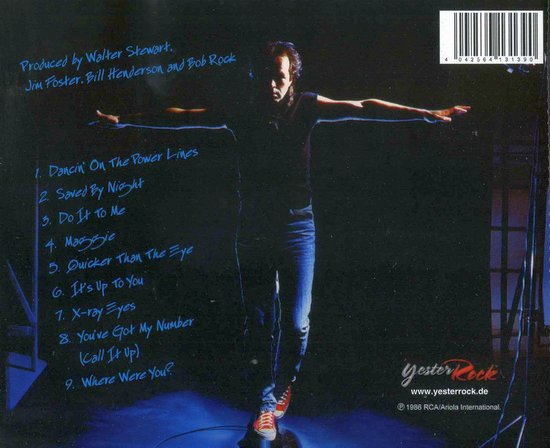 Bootlegged many times, finally this YesterRock remastered reissue make justice to this lovely ’80s record, with all the magic from the era plenty of catchy melodies and choruses. I’m a real sucker for this kinda stuff, so a big thumbs up for this remaster.
Quite unknown and a must listen for ’80s AOR fans.