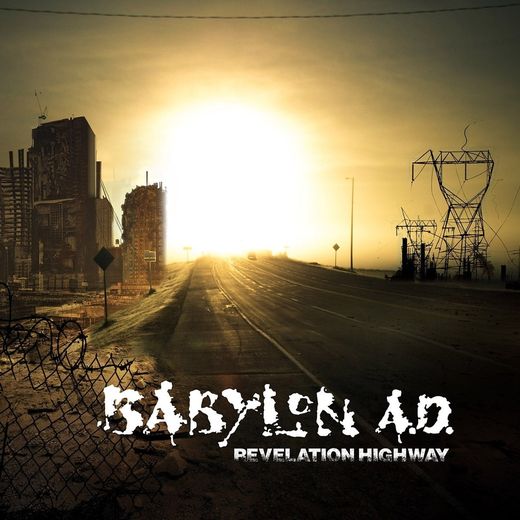 BABYLON A.D. is one of the few hard rock bands from the late ’80s / early ’90s that are still operating with all of their original members: vocalist Derek Davis, guitarists John Matthews and Ron Freschi, drummer Jamey Pacheco and bassist Robb Reid. The group formed in 1987, and to celebrate its 30th anniversary, BABYLON A.D. will release a new album, “Revelation Highway“, on November 10 via Frontiers Music.

Babylon A.D. was always one of my favourite acts from the late ’80s hard rock scene. They were a 4-piece that had the songs and the talents to put so many much bigger bands in their wake. Their first two albums, the self-titled release from 1989, and ‘Nothing Sacred’ from 1992 have been records that have stayed with me since they were released, and both are full of real quality and more than their fair share of songs you’ll never forget.

When the band finally reformed with all the original members on board in 2014 to release four song EP ‘Lost Sessions / Fresno, CA 93’ I hoped like many fans that this would be the start of something.
The result is here just in time to celebrate their 30th anniversary. “Revelation Highway” might just be the best slab of traditional Hard Rock you’ll hear all year and really recaptures the classic sound of the band with a subtle modern twist.

Starting off with the brilliant new single ‘Crash And Burn’ you sense the band is firing on all cylinders setting up the listener for an intense and rewarding experience. The musicianship is obviously excellent and the tone of the album continues through the hard-hitting and melodic ‘One Million Miles’, the swaggerin’ ‘Tears’, and the excellent ‘Rags To Riches’, a tale of the climb to fame shot through with searing guitar it gets the foot tapping instantly and is another sure-fire winner.

‘Fool On Fire’ has a bluesy grit, intensity and groove, while ‘She Likes To Give It’ is unashamedly ’80s melodic hard rock and gives you a shiver as you hear the drums and the bass drop in above the well-fashioned lick. It’s one of those midtempo slow burners full of dynamics that the band made their own back in the day and they don’t miss a beat here with a wonderful breakdown and cool guitar break: this one has it all.
‘I’m No Good For You’ just keeps the melodies going. It’s a song that wouldn’t be out of place on the band’s debut and it sizzles and shimmies before hitting you with that ear-worm of a chorus.

Before too long though we’re in the closing stretch and the quality doesn’t waver for a second. ‘Saturday Night’ might just be the hardest song here and it’s also one of the best, telling tales of rocking nights and those mythical Saturday nights out on the tiles – it’s certain to be a live favourite.
The last word this time around goes to ‘Don’t Tell Me Tonight’ another highly melodic rocker that just seems to underline all that has come before, it’s a great way to close what might just be one of the best Hard Rocking comeback album this decade.

With four songs revisited and revamped from old demos, and the others fresh off the press there’s a timeless feel to “Revelation Highway”.
Babylon A.D. has crafted an album that could easily have been the natural successor to its eponymous ’89s debut and ’92s sophomore effort. All of the classic components that made Babylon A.D. one of hard rock’s true up-and-comers in the late ’80s can be heard on “Revelation Highway”.

It’s taken 25 years to get our ears on it, but the B.A.D. boys are back with one of 2017’s most irresistible sweat and swagger, hard n’ roll records. An album that is as relevant today as it would have been a quarter century ago.
HIGHLY Recommended