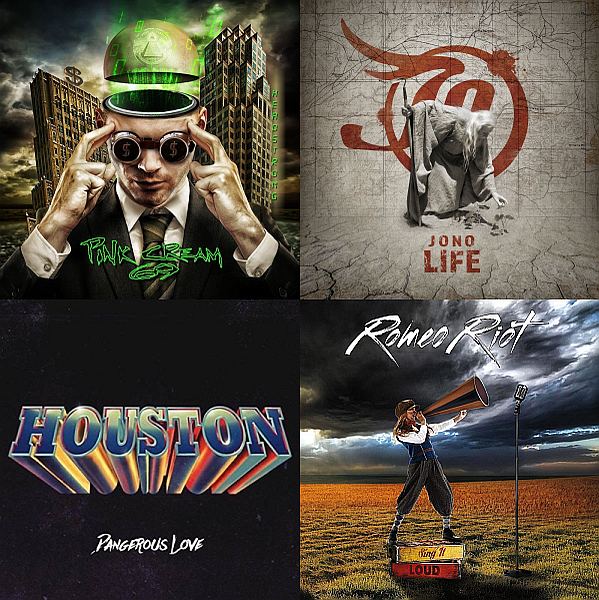 This end of the year promises to deliver some stupendous albums, let’s check the newest advanced singles from CD’s to come. Via Frontiers Music we have one of the most anticipated comeback acts in years: PINK CREAM 69. Commanded by bassist (and renowned producer) Dennis Ward, the band will release their new album, Headstrong, on November 10th. ‘Path of Destiny’ is the newest single, another killer track from these talented musicians.

Also on Frontiers, one of the most brilliant bands apperared in the last ten years, Swedish melodic rockers JoNo, will release their new album Life on December 1st. Check the awesome first single ‘No Return’.
From Sweden as well, classy AOR act HOUSTON have presented ‘Dangerous Love’, the very addictive first single from their upcoming album III. Love it.

A new group is about to be unleashed as Kivel Records are about to release the debut album from ROMEO RIOT, a “supergroup” of sorts uniting members of Tango Down and Bombay Black, a former Farcry band member and ace Melodic Rock songwriter Jace Pawlak. ‘Room To Run’ is the delicious first single.

The music of female fronted Swiss quintet TIERRAX is a cocktail of sleazy metal with hard rock elements that connects with the ’80s movement. ‘On My Way’ is their last single, showcasing a tight, professional band. A full album in the making.

What would it sound like if Amaranthe decided to ditch all their male vocals and let Elize Ryd perform all vocal lines on her own? Well, you’d probably get something that sounds a bit like Heroes in Time, the debut from Swedish melodic metal band METALITE. As their name suggests, this is very commercial, accesible melodic metal. ‘Nightmare’ is another single from the debut album.

And we have new cuts from the upcoming albums from SHAKRA, DIAMANTE, THE DARK ELEMENT, Germans hard rockers VICE and more…