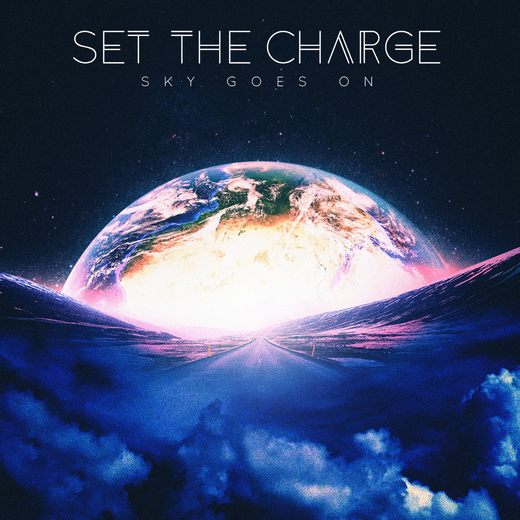 “Sky Goes On” is full length debut CD by SET THE CHARGE, a four-piece band from New York which was largely a studio project until early 2014 when founding members Anthony Vincent Valbiro (vocals) and his brother Frank (drums) connected with Derek Ortiz (6-String Bass) and Tom Dicarlucci (guitar) for a full line-up.

You may recognize Anthony Vincent as the mastermind behind the Youtube sensation “10 Second Songs” where he takes popular songs, and sings them in a multitude of different styles that showcase his phenomenal vocal abilities.
His Youtube page has garnered a massive 2,4 million followers, as well as an astonishing 139 million video views.

Drawing influence from various eras and genres of music, Set The Charge’s sound is as much of an homage to the past as it is a dive into the contemporary – and there is no better testament to that than their album, “Sky Goes On”.
The band has a plethora of different influences between the members which has allowed them to create a unique sound.

Indeed, Set The Charge does not seem to care about genres. There are abundant rock guitars, cool synths, some awesome 6-string bass guitar, strings, theatrical pianos and everything is crowned by Anthony Valbiros voice, ranging from ethereal passages to powerful verses.
‘Actiones Secundum Fidei’ (“We act according to our faith”) is the short intro plenty of effects, closely followed by the musical orgasm “Everything But Me”, which comes with its progressive mixture of synths and guitars completely captivating. However it’s a very commercial song apt for modern rock radio.
Sure, Set The Charge has the right to create a song like this – you gotta sell the album – but the juicy stuff is about to to start with the next cut…

… and what a wonderful piece it is “Tell Me”. This is a modern sounding song with rumbling bass lines, synths and steady drums, but with a classic background. And here I will tell you why I like Set The Charge so much: they remind me of awesome Swedes JONO.
As happens with the terrific Scandinavian act, Set The Charge has a certain Queen influence here but they morph everything into something completely new.
And captivating…

Do you need an ’80s oriented melodic catchy tune? Then play the fantastic “Right Side Of History”. Get the more commercial side of Rush and add some Queensryche Empire, but much, much more melodic and infectious. What a great song!
‘Pay No Attention’ is another short, mysterious interlude before Set The Charge shine again with a change of direction; ‘Don’t Let Them In’ conveys a great funky feeling whit a very original rhythm and harmony vocal arrangements.

More JONO / Queen comes with “Yes And No”, where Anthony Vincent Valbiro doesn’t stop to surprise you with his incredible vocal arsenal. He sounds a lot like Gary Cherone (Extreme) on this superb track.
“Betsy Brown” is dramatic, emotional, with great crescendos – and again – awesome harmony vocals in a JONO style.

For more variation “Youngin” is a rocking track with more guitar presence and quite similar to Winger’s last works, and “Assimilating” feels like Space Elevator (another great band) with a pulsating tempo.
They end the CD with the title track, a progressive atmospheric poppy tune hard to classify: there’s some Faith No More, some Massive Attack, and why not the elaborated side of Depeche Mode.

Did you read all the above mentioned comparisons? Set The Charge “Sky Goes On” is that and much, much more.
Yeah, let’s put them together again: JONO, Queen, Space Elevator, Rush, Queensryche, Extreme, Faith No More, Massive Attack, Depeche Mode, Winger… all into a delicious cocktail of innovative rock music, easily among the most original I heard for a while.
HIGHLY RECOMMENDED