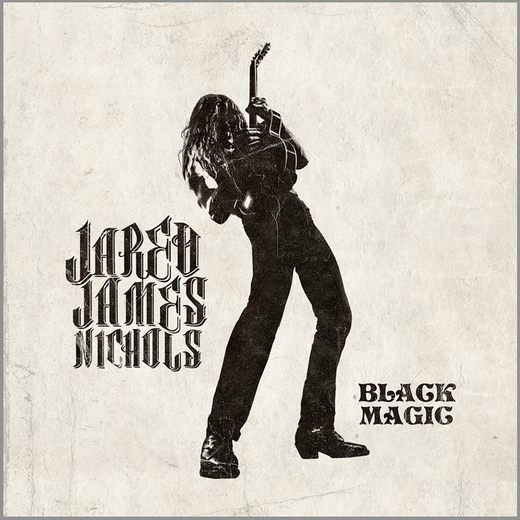 Although steeped in blues traditions, JARED JAMES NICHOLS plays electric guitar like a new-improved Ted Nugent (i.e. without the Neanderthal politics). For his three-piece’s second full-length album title “Black Magic” to appear tomorrow Oct 27, Nichols has gone even wilder than on his 2015 debut.

“Black Magic” sees Nichols return to the studio with intent, as he lays down the next stage of his glittering career with an eagerly anticipated release in the form of 10 hard-hitting rockin’ anthems.
The album kicks off with ‘Last Chance’ and from the off with the guitar scales flying and digital delay in force you know you’re in for one hell of a ride! It’s fast paced riff carries you off into a flurry of energy and with a catchy melody to boot it is a great introduction.

‘The Gun’ has a deep-rooted Delta-Blues vibe but with Nichols heavily distorted guitar again lifts this track to another level, it’s an audible force of nature and one to be enjoyed loud!
‘Don’t Be Scared’ with its gritty down and dirty riff has an almost Glenn Hughes like feel with its groovy undertow. ‘Honey Forgive Me’ takes you on a funky journey and showcases Nichols ability to fluidly flow from one musical style to another.

‘Home’ provides us with a slice of Southern-Rock magic, dipped in that Americana sauce and smothered in Blues-Rock dressing you cannot be drawn in by its ethereal charm.
‘Got To Have You’ with its Bluesy shuffle lifts the tempo a little with a foot tapper that keeps the energy levels up whilst ‘End Of Time’ with it’s sexy little guitar lick just grabs you, a song with real intent just leaves you feeling dirty, the right kind of dirty.

‘Run’ again brings another Glenn Hughes vibe to it’s addictive repetitive pulsating feel, with a light airy feel the guitar solo cuts like a knife and reminds you that Nichols is not only a top quality songwriter but a killer axe man too.
‘Keep Your Light On Mama’ is the penultimate track and at this stage you may be getting nervous, you’ll no doubt have clocked that there’s only one track left and the last 45 minutes of your life have been a blur.
Fear not, you have a repeat button.

The album closer ‘What Love’ is actually a demo take recorded of the song that resonated with Nichols and producer Tony Perry that they just kept it as is. A great move indeed as they have caught a little bit of magic often lost in a world obsessed with production perfection.

“Black Magic” is a first class return for Jared James Nichols and will no doubt strengthen his fan base on both sides of the pond, first class song-writing fused with his guitar virtuoso approach make for a dynamic and highly addictive album.
yThis heavy blues / bluesy hard rock of the highest order, easily one of the best Classic Rock albums this year.
HIGHLY Recommended