Cherry Red / Hear No Evil Records has started a GLENN HUGHES reissue program under the title The Glenn Hughes Remasters. Here we have “Feel [2CD Remastered & Expanded Edition]“, the soulful, funky album Hughes recorded in the mid-Nineties, remastered and with lots of worthy previously unreleased material.

Having Survived the hedonistic, life shortening spoils of fame with hard rock monsters Deep Purple, Glenn Hughes arrived in the Nineties clean of addictions and with no regrets.
With “Feel”, his third album in the post drugs era originally released in 1995, he parcels out little chunks of funk and morsels of late-nite soul like some rock’n’roll Masterchef winner in a charitable mood.

Reunited with Pat Thrall again and writing with Bruce Gowdy (Unruly Child), Hughes’ talent as a composer and vocalist bursts into bloom all over “Feel”.
It was a latent flowering of all the man’s talents as a songwriter and interpreter of heavy rock (‘Big Time’, ‘Redline’), streamlined percussive funk (‘Save Me Tonight’, ‘Coffee & Vanilla’) and blue eyed soul (‘Does It Mean That Much’, ‘Maybe Your Baby’).
Hughes, Thrall and Gowdy variously share production duties. Their lush arrangements and 3D rhythms are the album’s sonic heartbeat.
The whole shebang sounds weighty and dynamic, especially on this remaster.

And as has been well documented, Hughes invests much of himself in each and every song, bringing even the ordinary stuff to life in this slick travelogue through the rock / funk / soul landscape.
The album never makes a false move or takes a wrong turn, climaxing here with the first of the 2 CD set’s bonus tracks, ‘Holy Man’, a new version of the track from Deep Purple’s 1974 album Stormbringer, carefully sculpted by Hughes to fit into this new, laid back aesthetic. This was the original Japanese Bonus Track of the album.

The second CD is chockful of bonus material, all live, some electric, some acoustic. And it’s the latter that is the most intriguing.
There’s wonderful acoustic takes on ‘From Now On’ and ‘So Much Love To Give’ where you can hear Hughes’ voice in all its splendor. Conventional wisdom has it that the true test of a great song is how it sounds stripped down, minus the polish, the overdubs.
It’s always something of a risk, and it generally exposes those artists whose success is heavily dependent on studio recording wizardry.

Hughes breezes through these unplugged tests. He makes ‘From Now On’ (from a ’94 tour of the Netherlands) sound like a vocal exercise, with added emotion.
And, hinting perhaps at his personal resurrection in the early Nineties, ‘So Much Love To Give’ (Sweden, ’93) and ‘Lay My Body Down’ (Japan, ’94) have a quasi religious feel. Hughes vocalises with a controlled fervor, but it sounds like one he’d be happy to bear.
The electric tracks (including Purple’s ‘Burn’ and ‘Stormbringer’) taped in a 1994’s Germany performance, simply rocks, and The Voice Of Rock show his credentials. 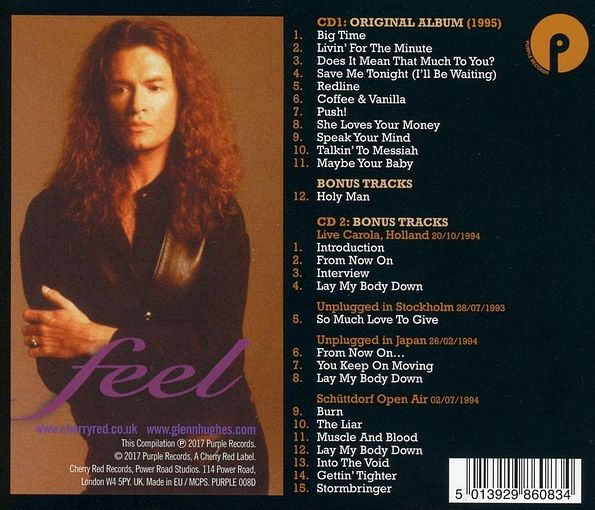 In all its different exposure (studio / live / unplugged), “Feel [2CD Remastered & Expanded Edition]” reaffirm what we already knew: Hughes is an immense talent.
It’s a fantastic release because not only features “Feel” remastered, but also a juicy set of previously unreleased material much more worthy than a ‘fill a bonus disc for a deluxe edition’: it showcases a terrific vocalist returning in top form.
Highly Recommended