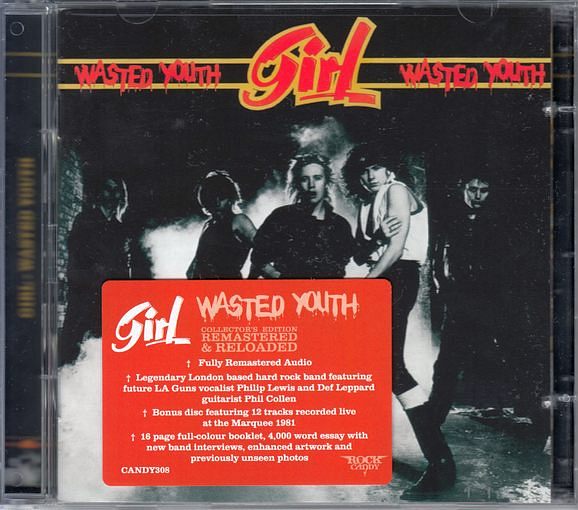 Crashing awkwardly into a scene that was almost exclusively primed for down and dirty hard rock, Girl were utterly out of step with the times. Hard rock bands during the very early ’80s complied with a strict in-vogue youth uniform of denim, leather and greasy long hair.
The NWOBHM, as it was labelled, may have been a force for good but it certainly wasn’t tolerant of aesthetic deviation, something that Girl found to be a major stumbling block.

Dressed to kill, they resembled a car-crash combination of glam and new wave. Musically, however, their riff-tastic style was more in tune with Aerosmith, Cheap Trick, and Kiss.
The band’s somewhat androgynous look, penchant for eye makeup and cocky pouts, set them apart and there was no getting away from the fact that visually these guys were totally out of step with the scene.

Sadly, therefore, they suffered some ridicule; despite the fact that they were actually trailblazing a style that was later successfully utilised by acts such as Hanoi Rocks, Mötley Crüe and Ratt.
That this band was the breeding ground for Def Leppard (Phil Collen on guitar), LA Guns (Phil Lewis) and a significant part of the UK film industry (Gerry Laffy) has been well documented.

“Wasted Youth” was the band’s second album for Jet Records, originally issued in 1982, and one that was recorded in two phases, amidst getting bogged down in the sort of unnecessary label aggro that had already started to erode their faith.
We’re only a few bars into the torqued up, screwed down hard rock of the title track, and we can clearly hear that Lewis has perfected the sneering, whiplash vocal with attitude, which he again deploys on ‘Overnight Angels’, squeezing out every howling moment of emotion, in step with the lean, mean rock machine the band had become.

‘Ice In The Blood’ too is a real standout. A rock ’n’ roll terracing chant wrapped up in barbed but beautifully crafted Hendrixian voodoo magic from Laffy and Collen, technically exact and heart racing at one and the same time.
Yet, the grown up rock sophistication of the bluesy, balladic ‘Old Dogs’, might just be the album’s high point.
There’s also some terrific rockers in ‘Thru the Twilight’, ’19’ or ‘Sweet Kids’, and you can absolutely see how this is a precursor to what bands like Motley Crue and L.A. Guns would go on to do.

This Rock Candy reissue includes as bonus disc the band’s Live At The Marquee album, from 1982, widely touted as one of the better rock band live albums from the Eighties. With good cause.
The whole 12 track gig is here in its entirety, giving the words “bonus tracks” a new definition.

With “Wasted Youth”, Girl thrown a rope around the musical chaos of the times and pulled it to their breast. But, guess what? The label didn’t understand what was going on, and let them float off into space.
So it’s no surprise that “Wasted Youth” ended up being Girl’s final album. A fate accentuated by the departure of guitarist Phil Collen, accepting an offer to join Def Leppard for their epoch making ‘Pyromania’ album.
Later, Phil Lewis went on to front highly successful rock outfit LA Guns. Both of them left behind a 24 Karat legacy, one that has been hailed by several high profile musicians as a huge influence on the glam hard rock explosion.

The fact that both albums have been sumptuously remastered by Rock Candy’s crack team of technical wizards is also, once again, cause for celebration, as are the “added value” liner notes.
Thanks to Rudio for this one!
HIGHLY Recommended