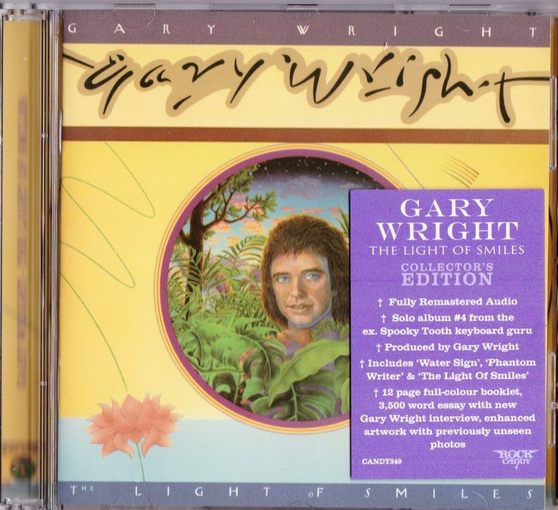 Rock Candy Records have just remastered the two best albums by GARY WRIGHT, the American musician known for his role in helping establish the synthesizer as a leading instrument in rock & pop music. “The Light Of Smiles” is Gary Wright’s fourth album, including as session musicians true legends in this matter such as David Foster, Jay Graydon and Steve Porcaro.

Gary Wright’s place in musical history was undoubtedly secured by the huge international hit single ‘Dream Weaver’, a recording that still has an afterlife to this day. But that wasn’t the first time Wright had generated interest in his musical career.
Back in the late ’60s this New Jersey born musician relocated to the UK and, on the encouragement of Island Records boss Chris Blackwell, joined forces with Spooky Tooth, one of the most respected acts of the time.

When Spooky Tooth broke up, Wright moved back to America and secured a prestigious solo deal with the Warner Brothers label, recording ‘The Dream Weaver’ album which proved to be an unexpected success, selling close to a million copies.
Refocusing his attention, he quickly set about recording the follow up album, once again recorded in Los Angeles, and building on the layered keyboard style that he had become known for.

It also featured a few of his highly regarded touring musicians such as drummer Jim Keltner, keyboardist David Foster and future Toto bassist Steve Porcaro.
Melodic and atmospheric in nature the tracks appear to conjoin both lyrically and musically. There is a decidedly light, poppy progressive rock feel to the presentation, partly driven by precision musicianship and expansive arrangements.

Tracks such as ‘Watersign’, ‘Time Machine’ and ‘Phantom Writer’ are impressive slices of melodic proggy with a defined AOR edge, bringing to mind Supertramp, Giuffria’s Angel, The Alan Parson’s Project, etc.
As you could imagine, here’s tons of lovely analog synthesizers and keyboards, in a work that influenced many artists / music to come in the following years.
Impeccable, pristine remaster by Rock Candy Records. (thanks to Mamedia for this one!)
Highly Recommended