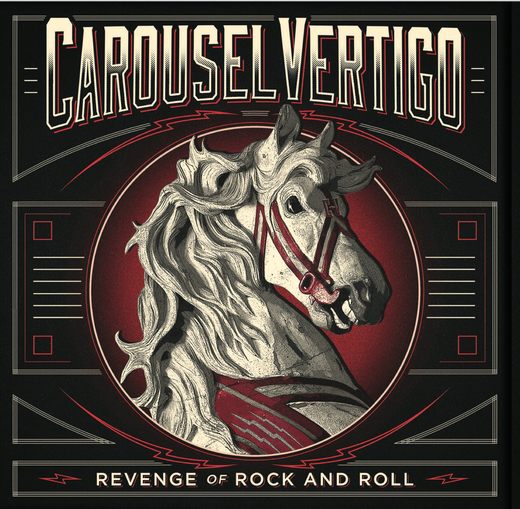 Few weeks ago one of you asked for CAROUSEL VERTIGO debut album to be revisited here, and now this excellent Classic Rock band are back with their second effort “Revenge of Rock And Roll“… And what an album it is!
From the get go its music to sooth your soul and melt your senses while reaching down your pants and having a good rummage.

On “Revenge of Rock And Roll” put a bit of bluesy British hard rock here, a smidgeon of Deep Purple there and more than a pinch of vintage Whitesnake: this is an eclectic grab-bag of rock’n’ roll that flaunts its ’70s / ’80s influences proudly but ultimately manages to forge its own identity.
Whether rock n’ roll ever disappeared – whatever was meant to happen as a result of grunge never actually did, no matter what conventional wisdom is – and whether it needs to wreak revenge on anything at all, is open to question.

What is crystal clear is the first minute of Carousel Vertigo’s second album renders the debate superfluous anyway. The Def Leppard-esque harmony vocals, the Hammond organ lick and a riff straight out of Keith Richards’ play-book, all happen before you get to the vocals of Vincent Martinez. Like someone mixed Paul Rodgers, Steven Tyler and Chris Robinson just for kicks, “No More Hesitatin’” is not just an opening jab, it’s a full-on uppercut to the chin.

It’s entirely tempting to end this review right there, because that’s basically the four piece – three Frenchmen and an American – in a nutshell. They know classic 70s / 80’s rock, all songs are really good and they are totally cool, but they are much, much more.

They play bluesy hard rock as well in the best British tradition, and they write slamming hooks like the one on “Jackie Run Run”.
And you know those big power ballads Aerosmith used to do? The ones with Liv Tylor and Alicia Silverstone in the videos? Yeah, well “Hideaway” is the modern equivalent.
Then there’s the title track. All loose limbed Black Crowes-isms, and featuring a horn section arranged to rock. “What’s it to ya? You two-bit loser” goes its first line like it really isn’t interested in your opinion. Neither should it be. It’s got too much else going on.

“Hard Luck Lover” sounds like a Thunder song and it distils all cool music into four glorious minutes, and just when you thought the collection couldn’t be more fun, along comes “Get It On”. It hits the nail on the head. “Just another soul singer, in a rock n roll band” sings Martinez and the boy isn’t wrong.
“Well, Alright” is the spirit of drunken nights with an early Whitesnake vibe captured perfectly, while “Don’t Take It To Heart” rocks in a bluesy midtempo with some Deep Purple / Gary Moore on it and finds something soulful to say, as it stretches out over its close on seven minutes. It is mere proof that there isn’t anything Carousel Vertigo can’t do. 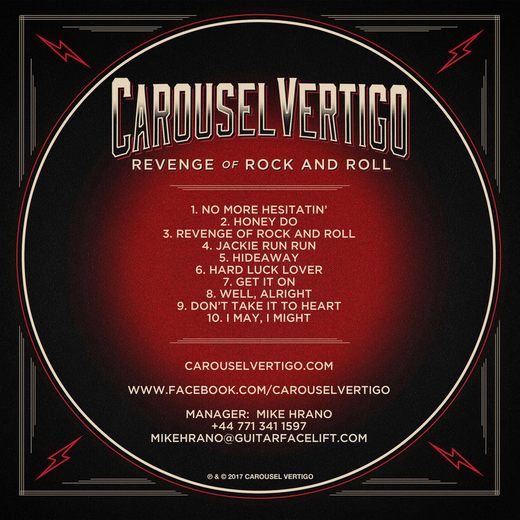 “Revenge Of Rock N Roll” is Carousel Vertigo second album and, if you haven’t heard the first, then you need to. After that, listen to this new opus: it’s even better.
If you like Classic Rock as it should be done, you’re going to love it. Rock n’ roll ain’t getting revenge here, though. It doesn’t need to. There’s nothing that can come close to pure rock n’ roll when it’s done like this.
If there is any justice, Carousel Vertigo are going so stratospheric they’re going to be dizzy.
HIGHLY Recommended