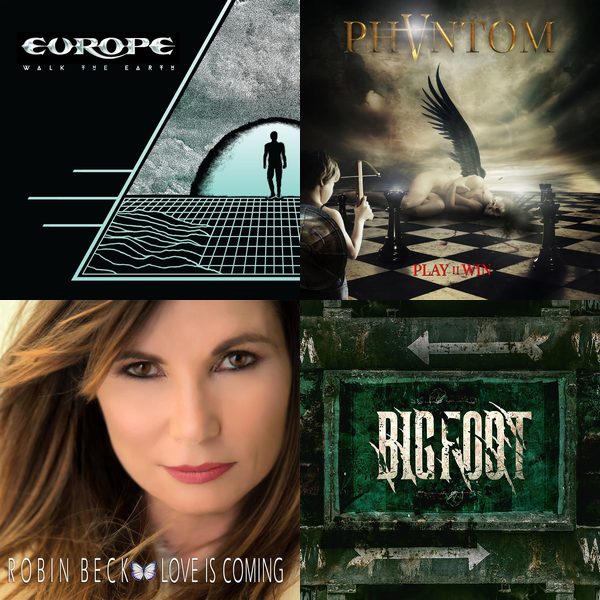 Also on Frontiers music, the label has announced the release of the self-titled debut of one of their latest UK signings: BIGFOOT. This is traditional killer hard rock combo with a punchy sound, but the new single ‘Forever Alone’ is a big ballad with clean electric guitar and smooth vocals.

German metallers PRIMAL FEAR will release a new collection, Best Of Fear, featuring 4 new songs. One of these is a cover of HEART’s classic ‘If Looks Could Kill’… wow, a killer punchy version.

More from Frontiers come by the hand of BABYLON A.D. The band are proud to be one of the few hard rock acts from the late ‘80s / early ‘90s that are still operating with all of their original members. Formed in 1987 and to celebrate their 30th Anniversary, the band will release their new album Revelation Highway on November 10, 2017. We hav here 2nd single ‘Rags To Riches’.

‘Walk The Earth’ is the brand new single from Swedish hard rock institution EUROPE. The track is the title cut of the band’s latest studio album, which will be released on October 20 via the band’s own Hell & Back label. A really rocking track.

Melodic rockers HIGHWAY will release their new album soon, and the first advance ‘Wake Up’ features on guest vocals no-other that the mighty Jeff Scott Soto. Great song from these guys.

Helix singer BRIAN VOLLMER has released the title track of his upcoming solo album ‘Get Yer Hands Dirty’. The song is classic Helix in sound, and according to Vollmer the whole record has a classic melodic hard style.

30 years of goodies will be packed into the new box set This & That (But A Whole Lot More) that former White Lion vocalist MIKE TRAMP will release on the 1st of December in a limited edition of 1,000 copies worldwide.
The box set contains 5 CDs and 1 DVD with previously unreleased material from Tramp‘s long career, but with brand new stuff as well.
Here’s one of the new songs; ‘Work It All Out’ a dynamic melodic rocker.

On November 10th, Swiss hard rock band SHAKRA are presenting their new studio album, Snakes & Ladders, via AFM Records. The first single is the title track of the album, a strong hard rocker with a poppy sensibility.

Super-group SUPERSONIC BLUES MACHINE, featuring the talent of bassist/producer Fabrizio Grossi, guitarist/vocalist Lance Lopez and legendary drummer Kenny Aronoff got ready their second album. The three members have worked with a host of big names during their careers including Styx, Steve Vai, Alice Cooper, Glenn Hughes, Cinderella and many, many more.
‘L.O.V.E.’ is the first single, and indeed you’ll love its classic rock feel.

And we have more from DEVOID, the new band with the respected vocal talents of Carsten ‘Lizard’ Schulz. ‘Mind Keeper’ is the third advance from the debut album, featuring a killer guest solo by incredible guitarist Mattias lA Eklundh (Fate).

Vocalist Amy Lee promised reimagined versions of some of EVANESCENCE‘s biggest songs for the band’s upcoming Synthesis album, and we’ve now got our first taste of what that will sound like. The group just released the new version of ‘Bring Me To Life (Synthesis)’ arguably the biggest song in their catalogue.

Steve Lukather’s son Trev is playing and arranging the new album from young female rocker DIAMANTE, and the fresh single ‘Sleepwalking’ is a cool rocker with a strong ’80s Joan Jett vibe on it.
Welsh glam metal veterans TIGERTAILZ just released a very special version of “Fall In Love Again” featuring Suzi Chunk on vocals. This is to commemorate ten years since losing their bass player Pepsi Tate to pancreatic cancer. The track won’t be included into any future album.