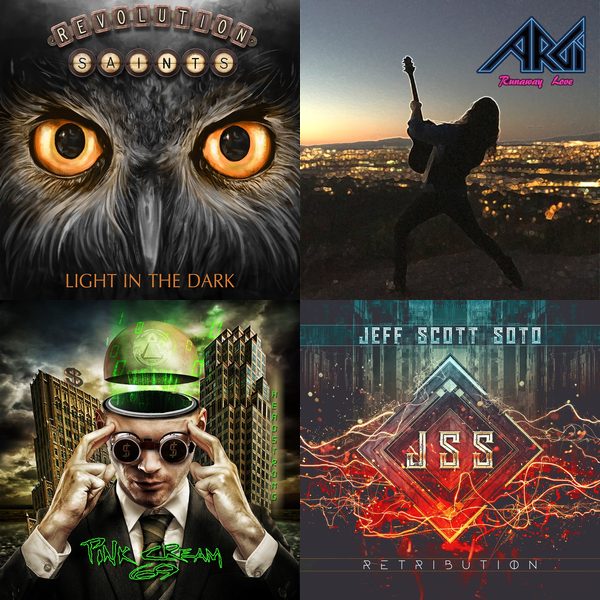 A new month is soon arriving, so let’s check some upcoming releases advanced singles. Via Frontiers Records, Melodic Rock stalwart JEFF SCOTT SOTO will release a new album, November 10. Co-written and produced together with Jeff Scott Soto alumni Howie Simon, “Retribution” is Jeff’s sixth proper solo studio album in a style that fans have come to know and love from the legendary singer over the years. Second single ‘Inside, Outside’ soars.
Also on Frontiers, November 10, is scheduled for SWEET / LYNCH new CD Unified. ‘Afterlife’ is another cut from the album, a groovy rocker.

And on the same label, we have one of the more anticipated comeback acts in years: PINK CREAM 69. Commanded by bassist (and renowned producer) Dennis Ward, the band will release their new album, Headstrong, on November 10th. The first track from the upcoming release, ‘We Bow To None’, is a killer Euro Melodic Hard Rock tune in the classic Pink Cream 69 style.

REVOLUTION SAINTS, the band featuring Deen Castronovo (Journey, Bad English), Doug Aldrich (Dead Daises, Whitesnake), and Jack Blades (Night Ranger), will release its second album, Light In The Dark, on October 13 via Frontiers. We have the third cut ‘I Wouldn’t Change a Thing’, a melodic ballad mixing equal parts of Journey / Night Ranger. Killer band.
STRYKENINE is a great new Stockholm-based Melodic Hard Rock band which has released a new single titled ‘Dangerous’. Just wait to hear the infectious ’80s melody of this tune. There’s an album in the making. Love this song.

ARGI is the new musical project of Spanish guitarist Dani Argiles influenced by ’80s US Melodic Rock / AOR. The first song is called ‘Runaway Love’ and features on lead vocals no-other than the late David A. Saylor (Push UK, Wild Rose). It’s a wonderful AOR song in a crossroad between Survivor and White Sister.

Speaking about talented David A. Saylor, seems the vocalist left many material recorded before passing away, as he put the lead vocals on ZHENX self-titled debut. This is the new band of ex-Baron Rojo bassist, Gorka Alegre, and the record features guests performances of Herman Rarebell (ex-Scorpions), Bill Leverty of Firehouse, and David Reece (ex-Accept, Bangalore Choir).
‘Action’ is the opening title, where Saylor’s voice feels so much at home but moves in a different direction to his solo albums and other projects he was involved with in the past. This is edgy Melodic Hard Rock, and a really good one.

Featuring the likes of Toto’s Steve Porcaro, Bobby Kimball, Leland Sklar, Alessandro Del Vecchio and more, GGM is a brand new project produced by guitarist Marco Ferrari with a full album that will see the light very soon. ‘Precious Time’ is the other advanced single with a delicious melody that will delight AOR fans of all ages.
DEVOID is the new band featuring the respected vocal talents of Carsten ‘Lizard’ Schulz. ‘Religion’ is another track from the debut CD much more melodic rock oriented than the previously presented here.