Finally, after many years, STEELHEART are back with the new album “Through Worlds Of Stardust” to be released soon via Frontiers Music. This Japanese Edition appeared today including the obligatory bonus track.
In fact, the tern ‘are’ should be replaced by ‘is’, because Steelheart is the brainchild of powerhouse vocalist Miljenko Matijevic. The multi-octave range singer is the heart & soul of the band.
If you never heard Steelheart, chances are you heard Miljenko anyway, as he was the singer of We All Die Young – mimed by Mark Wahlberg in the film Rock Star.

Although Steelheart was part of the hair metal / glammy hard rock secene emerging in the early ‘90s, the group was always more ‘thinking man rock’ than their peers, and the 2017 version of the band has a contemporary and edgy feel, while still retaining the patented powerful vocals of Miljenko.

‘Stream Line Savings’ the first track here begins with Mili screaming over a funky breakdown. It’s a track that lays that great vocal on the line in an updated take on the territory Led Zeppelin graced so consummately in the 70’s. It’s a great song, dynamic and mature, free flowing and powerful, yet brooding and edgy.
A great way to say welcome back after 9 years without a studio album – 2008’s rather fine comeback ‘Good 2B Alive’.

Following that the spiky ‘My Dirty Girl’ hits like a hard rocking maelstrom and harnesses all that fans from back in the day will love about the band to a brand new engine. It’s a song that certainly looks forward and manages to capture a real sense of energy and urgency.
‘Come Inside’ changes the pace, laid back, deliberate and white hot. In the space of just a handful of songs like me you’ll be wondering why it’s taken so long to come see us again.
‘My Word’ has a thoroughly modern sound not a million miles away from the sort of music bands like Alter Bridge have been doing so well, it’s melodic, solid as a rock and thoroughly addictive.

One of the two singles released so far ‘You Got Me Twisted’ follows. It’s another clear sign that Steelheart is back – a searing midtempo and clear statement of intent. It’s one of the most immediately satisfying tracks here and shows the sheer power and depth of Mili’s mesmerizing vocal abilities.
‘Lips of Rain’ opens up the second half of the album in similarly fine fettle. It’s an even gentler and more traditional ballad and beautifully orchestrated. It simply soars, sweeping you up, and sports some killer guitar amidst the lush orchestration.

‘With Love We Live Again’ that follows starts out with simple strummed guitars and similarly smooth backing. It’s altogether more ‘Zepplinesque’ in style and shows that not all slow songs are built from the same.
‘Got Me Running’ breaks the pattern and cranks it up, but not too far to be jarring, its a stuttering mid-tempo number that bursts into flame as the chorus hits and again it’s a sure fire winner.

Hot on its heels ‘My Freedom’ is another slower number, but with more crunch amidst the sea of strings and keys. It’s one of the best here – sweetness with and edge in Mili’s voice and an inescapable melody that sticks like glue.
Closer ‘I’m So In Love With You’ is a stripped number, piano and vocal envelop you and you find yourself mesmerized by Mili’s vocal as he declares his love. 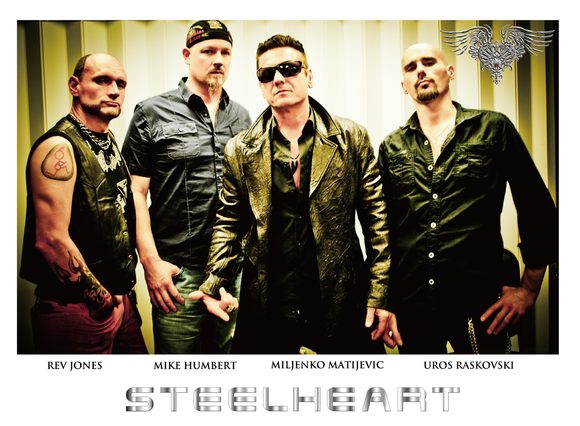 Looking at the album from a certain point of view you could argue that ‘Side 1’ (The first five tracks) of Steelheart’s latest is the ‘Rock’ side and ‘Side 2’ the ‘Ballads’ – it’s a daring statement to make and might surprise some but Steelheart has always been strong across the board.
With ‘On Through Worlds Of Stardust’ Mili has somehow manged to fuse all we loved bout the original band and pointed it toward a bright new future.

He’s a strong vocalist, that’s a given, he rocks hard and we all know that too, but the biggest surprise for many might be the sheer quality of the sower numbers here. And, at places, the modern rock sound is surely destined to divide a fan-base that craves something more pure and melodic.
This is hard rock from the heart, mature, modern music capable of moving people and taking you to a better place.
Highly Recommended