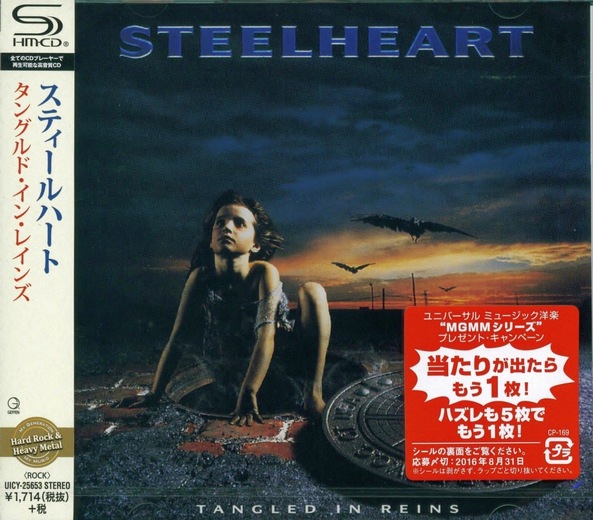 A second batch of purchased SHM-CD arrived from Japan, and one of these is STEELHEART‘s underrated yet superb second effort “Tangled In Reins” remastered in all its glory.
This is part of Universal Music Japan reissue series started last May of classic albums on SHM-CD, remastered and sold at reduced price. We ordered many, so stay tuned.

“I ain’t got time to listen!”… Regardless the opening verse of this disc, you have to make time. Anyone with a pulse who listens to this kind of music knows the name Steelheart and has heard the ungodly range Mike Matijevic can reach from their self-titled debut, and his vocal work in the movie Rock Star.
However, with the passing of the band from recording work it’s blatantly obvious the general public has not had the pleasure of hearing this Steelheart release.
Additionally, “Tangled In Reins” appeared in 1992, at the end of the Melodic Hard Rock era, and never got the promotion it truly deserved.

Steelheart released three discs in their short career, the catchy self-titled debut and the third in name only – it basically served as a platform for Matijevic to explore his musical interests as a solo act.
This middle release “Tangled In Reins” is definitely the pinnacle of their career, taking the musical momentum their first release created and expounded upon it.
“Tangled In Reins” offers some of the best written, intelligent arranged Melodic Hard Rock songs ever, in history.

“Electric Love Child” has a funky groove, fusing elements of big arena rock with a modern feel. The aggression and energy pours from the track “Steelheart”, sounding every bit of what the dark prelude to Skid Row‘s “18 And Life” could have been.
“Late For The Party” and “Sticky Side Up” are straight ahead rockers hinting at good times to come. “All Your Love” and “Mama Don’t You Cry” represent this disc’s softer side yet much more groomed than the ballads of the first album.

Steelheart’s “Tangled In Reins” is a monster album, and while many prefer the catchiness of the debut, this one ranks between the stronger / most elaborated works from a band born in the Hair Metal era.
If Steelheart first album was awesomely produced, “Tangled In Reins” should be amongst the Top 10 best produced Melodic Hard Rock albums of all time. Yeah, the drums, the sharp guitars… all come incredibly pristine and powerful. Without a doubt Tom Werman’s (Mötley Crüe, Twisted Sister) finest production work ever.

The sound from this Japanese remastered SHM-CD is out of this world.
Do yourself a favor; buy this for test purposes if you want, some kind of benchmark for how a Rock band should sound. “Tangled In Reins” possess a timeless feeling, a feeling that another 10 or 15 years could go by and this will still be a great sounding disc.
A Must Have