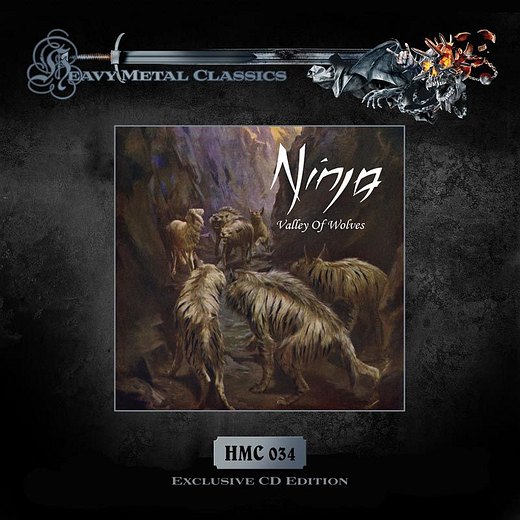 Finally the best albums from cult hard rockers NINJA have been remastered and reissued by specialized label Karthago Records via their Classics Series. Now it’s time for Ninja’s “Valley Of Wolves“, in a limited edition of 666 (!) copies, with hologram and a purchase certificate.

The German Wuppertal / Solingen area is famous all over the world for their unique sharp knives, but also for being the cradle of renowned international Rock acts like Accept. Ninja, while not successful as Accept, was part of the metal movement coming from there.
Forging a musical style with a typical ’80 Euro feeling based on a twin guitar attack, powerful rhythm section and strong lead vocals, Ninja created a solid fan base which lead into a recording contract.
Their debut was released in 1988 only on vinyl LP, quickly becoming a collector’s piece.

Around 2014 Ninja returned (and still are active today) and this resulted into the interest to reissue all their material, especially this one.
The ’90s weren’t a good decade for their brand of hard rock / metal and Ninja was, at the time, without a record label behind. So “Valley Of Wolves” was originally released by themselves in 1997 as CDR, in limited quantities.

Songs like ‘Silver Dagger’ or the title track are very good German-sounding metal songs with a true ’80s feeling akin Victory or Accept.
“Kings Waltz” has a more hard rocking approach with some keys in the background and a convincing statement: “I don’t want to live the life of a Zombie” in an obvious reference to the depressive grunge ruling the rock scene.

If you are forced to a ‘Dirty Job’, then it is better to be forced musically by Ninja with this track reminiscent of Krokus. Here are obvious parallels to AC/DC as well, and Ninja are certainly not worse than their role model.
There’s also the weird song ‘Herbert’ where the band flirts with Kraut rock, and an anthemic rocker in ‘Heart of a Beggar’. The album ends with the punchy rocker ‘Alright’ which reminds me a Paganini (the Swiss band) song.

Ninja’s “Valley Of Wolves” was recorded & produced by the band with a very low budget, but this remaster rescue the best of it.
A very cool reissue of an album virtually unheard and unknown to all.