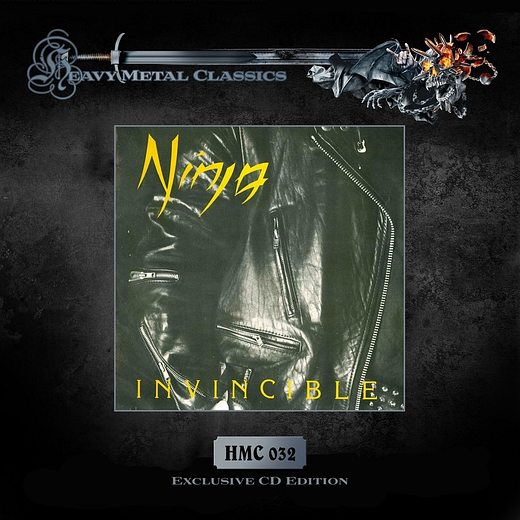 Much sought after for years by metal fans and collectors, “Invincible“, the debut album by Germans NINJA finally has been remastered and reissued by specialized label Karthago Record via their Classics Series, in a limited edition of 666 (!) copies, with hologram and a purchase certificate.

Germanic Wuppertal / Solingen area is famous for the sharp knives all over the world, but also for being the cradle of renowned international Rock acts like Accept.
Ninja, while not successful as Accept, was part of the metal movement coming from there.
Forging a musical style with a typical ’80 Euro feeling based on a twin guitar attack, powerful rhythm section and strong lead vocals, Ninja created a solid fan base which lead into a recording contract.

Ninja’s debut “Invincible” was released in 1988, only on vinyl LP and in limited quantities, quickly becoming a collector’s piece. The group recorded another album in the early Nineties and soon disbanded.
But around 2014 Ninja returned (and still are active today) and this resulted into the interest to reissue the cult debut album, with the much needed remastering from the original tapes.

Now, with a modern technology treatment of 24-bit remastering, “Invincible” sounds fuller, more powerful, with a lot of bite.
Songs like ‘Phoenix’, ‘Every Hour’, ‘Strangers’ or the title track are perfect examples of pure ’80s European Hard Rock / Metal with all the charm from the era.
In the same league of early Europe / Norum, Victory, Pretty Maids, Scorpions (‘Hold On’ has a little Blackout flair) and of course Accept, Ninja’s “Invincible” is a really nice album to discover for all-generation fans of the genre.
GREAT and welcomed reissue / remaster.