Nearly impossible to find, the two latest studio albums from Norwegian AOR icons LAVA are being available again thanks to AOR Heaven Records. “Alibi” is Lava’s last studio CD, recorded soon after their comeback album after many years out of the business.

“Alibi” sees Lava focused in a slick and smooth West Coast sound.
Stand out tracks like ‘Closet’ and Wendy’s Painting Pictures’, both wonderful songs that smells the pure L.A. West Coast flair of Airplay, and of course, ’80 Toto.
For a more poppy, easy listening stuff, then check title track ‘Alibi’, or ‘A Matter Of Time’ akin Mr. Mister or Richard Page solo. ‘Dangerous Game’ is an upbeat number with great instrumentation, while ‘Missing You’ a delicate midtempo. 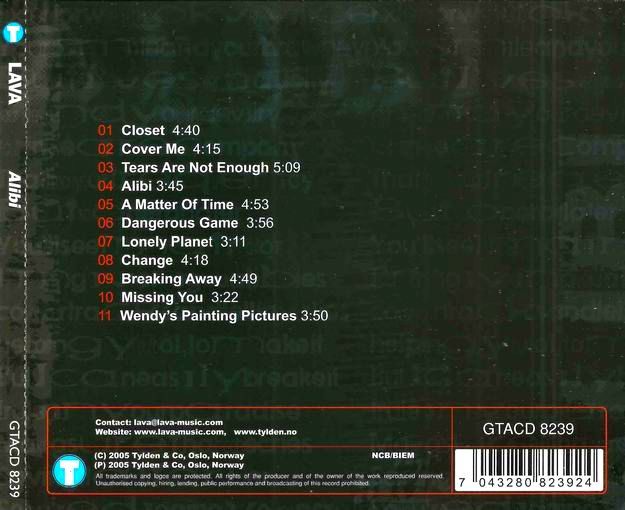 And what about the killer track ‘Cover Me’ in the classic Toto mould – Steve Lukather & co would be proud to write such a great track these days.
Fans of the light side of AOR / West Coast lovers will totally dig this superb Lava release, of course, with their usually polished, crystal clear production.
Very limited quantities available at AOR Heaven, you better hurry up if you want to secure a copy at a reasonable price.