To be released tomorrow, “Children Of The Sounds” is the new creation by acclaimed Swedish melodic progressive combo KAIPA.
It certainly looks good from the cover, and you don’t really need to listen too long to realise this is another brilliant effort from these guys – an album that will not disappoint fans of this genre.

“Children Of The Sounds” it’s all about progressive rock music of the melodic kind, with exciting atmospheres including all kinds of influences. Production is excellent, the vocals are smooth, as is the drumming, the guitars and keys arrangements working together to great effect.
It’s an album that’s overtly optimistic and positive, packed with the contrast of the vocals of Patrick Lundstrom and Aleena Gibson and catchy hooks and melodies.

The title track kicks things off with a mournful mixture of strings and woodwinds. Soon after, Gibson’s lone angelic rasp cascades over the backing for a bit before being complemented by Lundstrom as more instruments come in. As usual, they make for a lovely duo, issuing inspired lyrics. Per Nilsson’s electric guitar tones start on the first of a series of flying solo accompaniments that weave a constant and sweetly melodious path throughout the album.

Known for his metal / hard rock pedigree, Jonas Reingold (Midnight Sun, Devil’s Heaven) is the bass player in Kaipa, and his deep lines build momentum with alternating dominance. Of course, drummer Morgan Ågren (Karmakanic) provides interesting and fitting syncopation throughout, especially as the arrangement becomes extremely fanciful and elaborate.
Just about everyone shines during thealbum’s extended instrumental voyage, which is refreshingly dynamic, unpredictable, and hypnotic as they play around the central melodies with vigor and creativity.
It’s a testament to how progressive rock can be simultaneously infectious and intricate, and it leads back to the Gibson and Lundstrom’s harmonies beautifully as it ends, bringing the piece full circle.

Midway through ‘On The Edge Of New Horizons’ comes a wonderfully quaint section – musically a combination of Hammond, rhythmic acoustic guitar, twanging bass and fleet fingered keyboard soloing alongside lyrical images of birds soaring high, sun shining bright etc.
On the other hand, ‘The Shadowy Sunlight’ is the one piece that, as the title suggests, has a darker feel despite the welcoming classical string overtones. Then the mood changes to an overcast and ominous front. One that soon passes as the Nilsson guitar wizardry combines with some cutting widdly synth to cast its spell yet again. 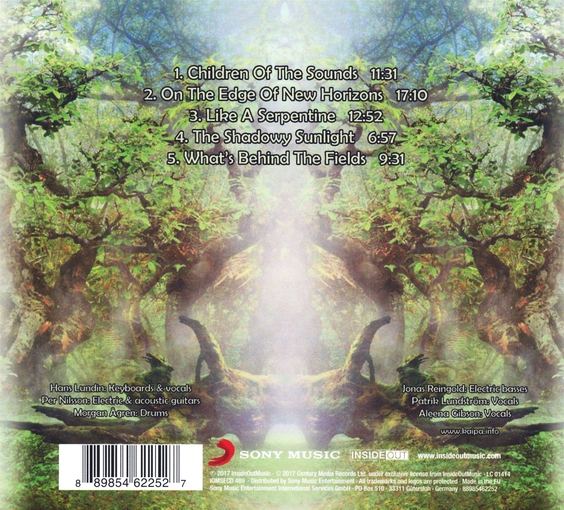 Kaipa’s “Children Of The Sounds” is true, classic progressive rock from the melodic side of the spectrum. Sure, each player in this band excels as both an individual master and a crucial cog in a cumulative wheel, but that could also be said for countless other acts.
What truly makes Kaipa stand out here, as always, is the ways in which they create celebratory sonic worlds filled with a childlike sense of wonder, hope, and possibility.

Rather than aim for soulless virtuosity (as a fair amount of their peers do), they make each technical moment serve the central goal of enveloping the listener in an aural fairytale of colorful, life-affirming compositions.
“Children Of The Sounds” is as fine an example of that, and it should be cherished as such by as many people as possible.