Born in 1984, JOINED FORCES paved the way for all the other original rock acts in Connecticut to follow. The band founded by talented Jimi Bell (House Of Lords guitarist for the last 10 years, Robin Beck, Maxx Explosion, etc) released an EP in the mid-Eighties, then recorded a full length album in 1989 but never released… but never it’s too late, here’s “Joined Forces” appeared few years ago, however, out of print now.

Playing in various bands mostly doing hard rock covers, lifelong friends guitarist Jimi Bell and bassist Mark Franco felt it was time to do their own music. So along with vocalist Marc Diamond and drummer Michael Karpiak, they started to tour the local Connecticut club circuit.
Sometime in band’s first year, Karpiak was replaced by Joey Aparo at which point Joined Forces exploded on to the scene…. they became CT’s “must see band”.
In ‘86 the group was featured in the movie ‘The Light of Day’ starring Michael J Fox and Joan Jett. The band already had a working relationship with Joan having toured with her.

By ‘88 the band had its first break up … loss of management played a big role in the band’s core and they split. Bell went to England, Franco moved to LA and Aparo moved to New York.
In 1989 Bell and Franco started talking about reunite. With drummer Joe Aparo back on board they brought vocalist Livio Gravini into the mix. New composed songs were recorded with the help of some well known names from the Melodic Hard Rock scene.
The only thing missing from this great band was once again that illusive record deal. Coming close but never achieving its goal of a major label contract, Joined Forces called it quits again in 1992.

Fast forward to this new century, Joined Forces’ unreleased songs recorded in 1989 plus some previous – produced by Paul Sabu, Jeff Cannata and James Christian (House Of Lords) – were finally released for the first time under the title “Joined Forces”, as the band’s name.
This is a first class ’80s Hair Metal / Melodic Hard Rock set of tunes, all professionally produced & recorded. 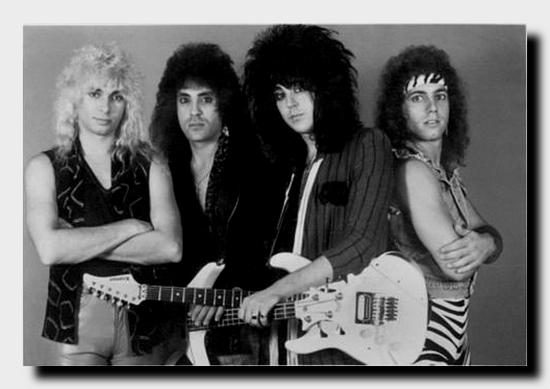 The earlier songs featuring original vocalist Mark Diamond are pure classic hair metal tunes sounding like While Lion or Rough Cutt, while the ones from 2nd era are more classic hard rock with a bluesier edge with some Badlands / Whitesnake on it.

Both singers are more than competent, but the real star on “Joined Forces” is guitar wizard Jimi Bell. His style is hot, melting, on par with the ones like Vitto Bratta (White Lion) or Jake E. Lee. While producing some tracks here, seems James Christian resulted impressed by Bell’s skills and he never forget him as in 2005 called the man to be House Of Lords’ lead guitarist, role that occupies until these days.

“Joined Forces” is a wonderful trip back to the glory days of the golden decade, including some amazing songs and melodies in a typically US 1989 Melodic Hard Rock fashion.
The sound quality of these previously shelved tapes is really good, and you can hear the expert hands of Sabu, Cannata and James Christian behind the producer’s desk.
HIGHLY RECOMMENDED