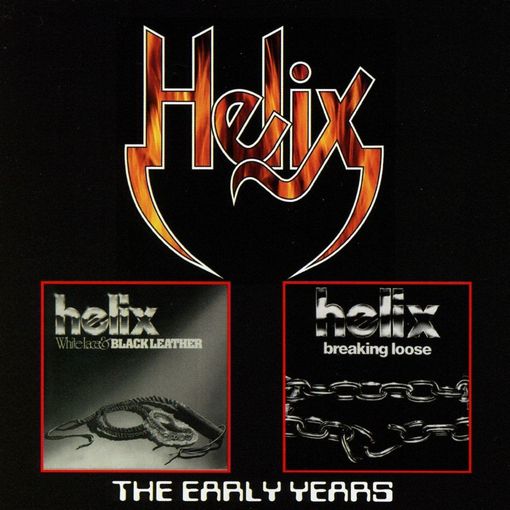 HELIX is perhaps the biggest metal / hard rock act in Canadian history, with a catalog of music that nearly spans four decades. “The Early Years” was a Helix compilation presented in 1991, featuring all the tracks from the band’s first two independent albums, ‘Breaking Loose’ and ‘White Lace & Black Leather’. This was the first ever CD release of these two albums, digitally remastered from the original tapes.
Now US label Perris Records is reissuing with a refreshed art this long time out of print compilation for the new generation, and for long time hard rock fans which never enjoyed Helix first albums.

“The Early Years” has a very good sound including tracks such as Helix’s first single “You’re A Woman Now”, “Billy Oxygen” (written & sung by guitarist Brent ‘The Doctor’ Doerner), and the catchy “Breaking Loose”.
From the first album one of my fav is mid-tempo ‘”I Could Never Leave”, one of their catchiest early tunes. “Don’t Hide Your Love” has a similar vibe, that being hard rock with an emphasis on melody.
“Here I Go Again” is not the Whitesnake song, but another one of those melodic rock songs with an early ’80s feel.

From ‘White Lace & Black Leather’ there’s “Breaking Loose” (titled as the first album). I don’t know if this was a leftover from the first album or not, but quality-wise there is nothing “leftover” about it. I would call it a typical Helix party rocker: a fast one, often used back in the day to open their sets. The lyrics are the kind of thing that Helix were about: the weekend!

However they were capable to pen interesting lyrics as well. “Long Distance Heartbreak” at almost seven minutes is Helix’s longest song ever. In the early days they tended to experiment a little with their songwriting, coming up with this mini-epic. Like many Helix classics, this one reads as a road song. Thin Lizzy they were not, but Vollmer captures the heartbreak in their lyrics while Doerner and Hackman take care of the guitar drama.

Helix still continues touring and rocking venues all over the world, and after their multi-platinum stardom they wrote some really good song too.
“The Early Years” delivers into one CD Helix first two albums, with a pristine remastering done in the ‘warm vintage’ way, not brickwalled method.
Highly Recommended