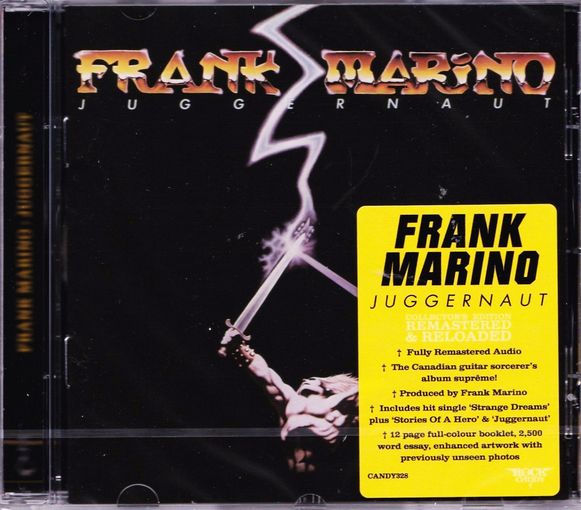 Rock Candy Records have just ‘Remastered & Reloaded‘ four of the most celebrated FRANK MARINO And Mahogany Rush albums. The explosive “Juggernaut” is the second Frank Marino album solely under his name, and the last of the series.

By the beginning of the ’80s Frank Marino was perceived by the music business, and the majority of his fans, as a red-hot guitar player capable of laying down riffs and solos like they were going out of fashion.
However, that overall impression belied his musical depth as a musician with a deep understanding of composition and arrangement. For Frank, despite his reputation for endless soloing, the goal was always about crafting songs that had meaning and weight.

Nowhere is this better demonstrated than on the “Juggernaut” album. Recorded and released in 1982, the record showcases Frank in spectacular form, setting out a stall that solidly welds his penchant for blistering hard rock and memorable songs.
The title track alone worth this disc, and it’s arguably one of his greatest triumphs, fusing a rock solid riff with a synthetic dusting of melody. Indeed, it became one of Frank’s most successful tracks, nearly nudging him into the upper reaches of the American Rock charts.

And that song is not alone as there are several equally impressive examples, such as ‘Midnight Highway’ and the brilliantly evocative ‘Stories Of A Hero’.
Sadly for Frank, this was the point, after seven albums recording for Columbia Records, at which he and the label reached a creative impasse, resulting in him leaving the company and vowing never to record for a major label again.
It was certainly a shame as, at long last, it seemed that he’d made a creative breakthrough, pointing him to a whole new level of creativity. 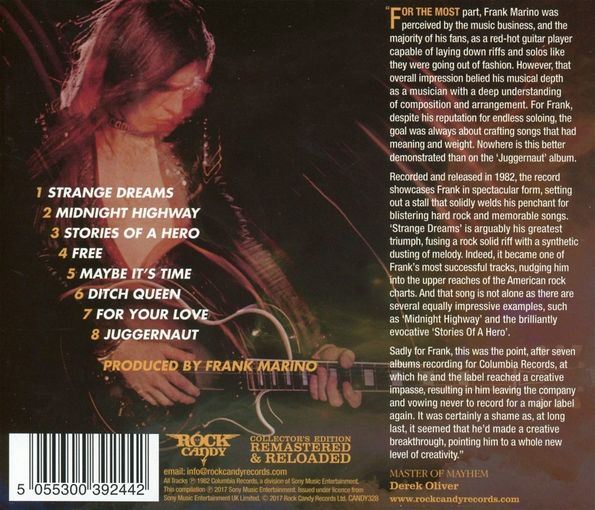 There’s some kind of maturity in “Juggernaut”, balancing hot heavy riffs with radio-friendly melodies, and here Marino utilised synthesizer for the first time to create a more opulent sound according to times, the first half of the ’80s.
The sound obtained in this Rock Candy remaster is spectacular, the best of the 4 Fank Marino albums receiving the treatment.
Highly Recommended