To commemorate the ten-year anniversary of their debut album, AIRBOURNE are releasing the collector’s box set “Diamond Cuts”, available in limited edition vinyl and compact disc.
What does it offer? Well, it will consist of Airbourne’s first three studio albums, Runnin’ Wild, No Guts No Glory, and Black Dog Barking. In addition, it includes a DVD with previously unreleased footage of the band.
Lastly, fans will get “Diamond Cuts; The B-Sides“, 15 rare tracks including 2 previously unreleased. Exciting right? So, let us examine this box of treasures a little further.

Kicking into high gear, “Diamond Cuts; The B-Sides”, starts off with ‘Stand & Deliver’. The first note alone will give the listener a sense of the Rock-n-Roll joyride they are about to embark. Forging on with ‘Red Dress Woman’, ‘Hotter Than Hell’ and ‘Dirty Angel’, Joel O’Keefe makes his love for the ladies very clear. And for hot guitar solos too!

Continuing the spirit of Rock, ‘Heads Are Gonna Roll’ is a song about good old fashioned fighting. Then there is ‘Kickin’ It Old School’ an ode to doing things your own way before preceding the first of two unreleased tracks, ‘Heavy Weight Lover’.
‘Heavy Weight Lover’ before 2010’s ‘My Dynamite Will Blow You Sky High (And Get Ya Moanin’ After Midnight)’ and ‘Rattle Your Bones’ spotlight the band’s love for writing about…well, sex, and party all weekend with a good dose of Rock n’ Roll.

‘Money’, the second of two unreleased tracks, will rock you straight into the fun of ‘Party In The Penthouse’ and ‘You Got The Skills (To Pay The Bills)’.
Bringing the record near its close comes ‘Jack Attack’, but let us not forget the remaining tracks, ‘Devil’s Child’ and ‘Loaded Gun’ which will leave the listener knocked out cold. 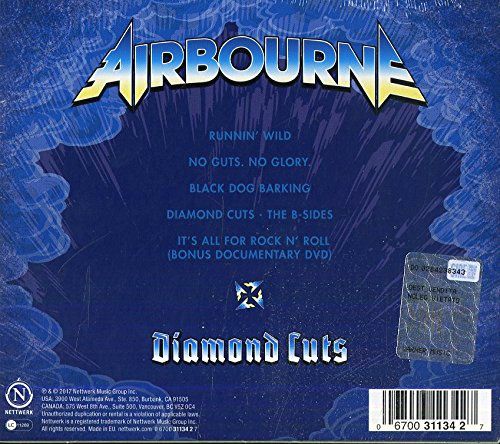 A wonderful celebration, “Diamond Cuts: The B-Sides”, proves Airbourne to be one of the best Rock / hard rock acts over the last decade.
They are one of those bands that are incapable of writing a bad song and the proof is in this box set. Fans all over the world want Airbourne to stick around for a very long tenure, and the band shows no signs of slowing down; for that they are saluted!
As a big mouth legendary vocalist said many years ago: It’s Only Rock ‘n Roll (But I Like It).