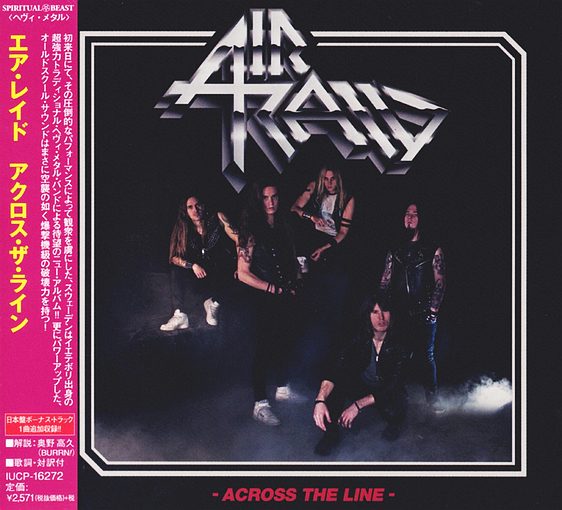 Classic, traditional ’80s metal is alive & kickin’ on the new album from Gothenburg-based enthusiasts of AIR RAID. Titled “Across The Line“, the Cd will be released at the end of the month, but just appeared in Japan including an exclusive bonus track.

Air Raid started in 2009, based on an initiative of bandleader Andreas Johansson. Night Of The Axe was the debut released in 2012, that acted as a springboard for signing a contract with High Roller Records.
Air Raid became part of a portfolio that also includes more Swedish bands, all revitalizing traditional metal by adding the unlimited enthusiasm of youth to this specific, classic style.

Three years after their second effort broke through the surface, it’s “Across The Line” which acts as the third strike. As we have seen many times before, it’s this the third album that is a very decisive one with a bigger impact on a band’s future.
In case of Air Raid, we can conclude that all signs direct into a more than positive future.

“Across The Line” showcases the quintet wild and full in ’80s denim & leather, as for what they are known for, but the new CD is also more mature, with songs that show an evolvement of band and sound.
Achieving such a solid and intense metal record wasn’t a very easy thing since the band had to deal with some line-up changes.

With Magnus Mild (guitar) and new vocalist Fredrik Werner (current OSUKARU singer) two new band members had to be integrated, an undertaking that obviously went very well.
It almost looks like these guys added a fresh new breeze which grows to a metal / hard n’ heavy storm throughout the entire record.

The album doesn’t include any downer or failure.
If you call classic Saxon (the track ‘Hell And Back)’, early Pretty Maids (‘Entering The Zone Zero’), 220 Volt (‘Cold As Ice’) and Yngwie Malmsteen’s Rising Force / Jeff Scott Soto era (‘Northern Light’) to your favorites, you should check out this album now.

Additionally there’s some ’80s Michael Schenker Group in ‘Black Dawn’, and a bit of Judas Priest in ‘Hold The Flame’.
The Japanese bonus track is a re-working of one track titled ‘A Blade In The Dark’ from the band’s full length debut, now re-done with the new line up. It’s pretty Iron Maiden mixed with Accept, and it’s darn good.

There’s a lot to love in Air Raid’s “Across The Line”: killer songs, strong performances and tons of melody. You have razor riffs (very clean) and soaring vocals by Werner (much more solid than in Osukaru’s records), and a very classic production with an eye in the ’80s but updated, punchy and vibrant.
Old-school traditional ’80s metal with power and glory.
Highly Recommended