The history of Wraith dates back to 1987, but apparently, as of the last 20 years, they like to release a studio album every ten years being the last from 2007. They arrive with a new and fifth album “Revelation” with guitarist Greg Russell the only original member and with new vocalist in Ryan Coggin.
The skinny on the Coggin acquisition is that he was offered the vocal job for Ratt, after Stephen Pearcy left, but choose Wraith instead.

Which also gives you one small clue to what Wraith 2017 sounds like. They sound like Ratt.
Maybe a combination of Ratt, Motley Crue, Icon, with perhaps a touch of Tigertailz and Poison, even some Def Leppard (song ‘Under The Hammer’).
Yeah, Wraith delivers classic Sunset Strip, hair and sleazy melodic hard rock with some metal edge. They do this with often fast-paced tunes loaded with strong hard rock rhythm and groove. The edge comes mostly from the sharp twin guitar assault.

Simply put, “Revelation” is guitar driven album. After twin guitar riffage and harmony, solos fly like fireworks in every song. As for Coggin, he has the perfect voice the Wraith sound and perhaps the songs were written to his timbre. Moreover he sings clean and melodic, staying strong and never overextending his range.
Musically, the aforementioned Wraith sound description is the essential formula for every song with some differences among them. Both ‘Lifeline’ and ‘Invasion’ begin with a motorcycle guitar riff intro ala Motley Crue, among others. 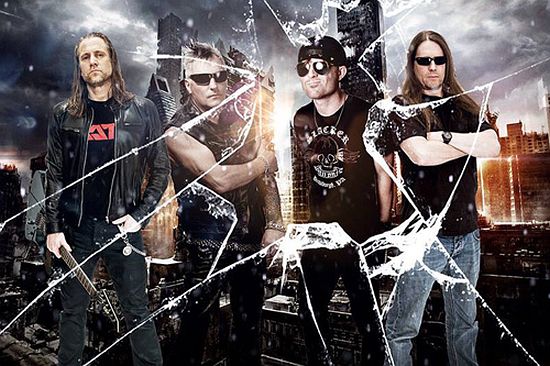 ‘Hunted’ begins with an acoustic start which is quickly swarmed over by electric riffage. ‘Into The Fire’ rips into a guitar solo straight from the gate and then develops into some catchy melodic metal with a great hard rock groove. The same could be said for ‘Dream Steeler’, another hook monster with big riffs and a catchy refrain.
The only ballad comes with ‘Leaving Me Again’, and it’s fine one. Good lyrical content that is delivered with a feeling many rocking bands fail to achieve with a slow song. I can just imagine a lot of broken-hearted people singing along as they relate to the words.

There’s indeed a strong 1987 – the year Wraith was founded – deja vu all over “Revelation”. From songwriting, arrangements, production, this is classic Sunset Strip riff-driven hard rock plenty of hooks and that razor electric guitars.
Wraith keeps the essence of that era, but the instruments set-up sound is updated and modern-punchy.
Hopefully we won’t have to wait another ten years for a follow up album.
Very, HIGHLY Recommended