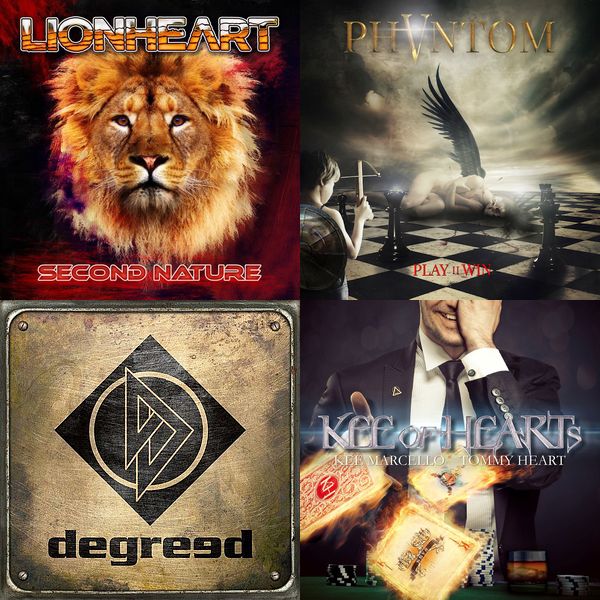 Let’s go with advanced singles from upcoming releases, many of these presented yesterday.
From the evergreen Frontiers Music camp with have “Bridge To Heaven”, another advance from which promises to be one of the albums of the year; the debut of KEE OF HEARTS, a new band built around true melodic rock superstars Tommy Heart (singer of Fair Warning) and Kee Marcello, former Europe guitarist, with a line-up rounded out by Ken Sandin (ex-Alien) on bass. Killer tune.

As the revival of the classic ‘80s hard rock and metal scene continues unabated here in the 21st century, one reunion has been at the top of the wishlist of many a fan for a long time: the songwriting combination of Tracii Guns and Philip Lewis under the L.A. GUNS banner. There’s a new album via Frontiers in October, and first single ‘Speed’ simply rocks.
Also in October super-group PHANTOM 5 will release their second album Play II Win. The band includes former Bonfire singer Claus Lessmann, producer and guitar player Michael Voss (Michael Schenker), Robby Boebel (Fontline) and Axel Kruse (Jaded Heart). Second single ‘Crossfire’ is just another fist-pumping melodic rock anthem.

Frontiers have finally signed HELL IN THE CLUB, a killer hard rock / metal band that has staked a serious claim in the European scene based on a lot of hard work and the resumes of the members. The new single ‘The Phantom Punch’ is the catchiest song ever penned by the band.
We have another strong single from DEGREED‘s upcoming album, the dynamic melodic rocker ‘Sugar’, and second advance from THE NEW ROSES (great band) next album to be released soon.

Great Melodic Rockers LIONHEART are back and with which seems an awesome record judging the quality of first single ‘Don’t Pay The Ferryman’. The band is signed by AOR Heaven and the album will be released soon.
Speaking about ’80s cult bands, Canadians BOULEVARD are back with a new album in September. Advance ‘Out Of The Blue’ is a lovely, breezy AOR tune.

Also in September is coming the debut of a terrific association; SCHERER / BATTEN, formed by great vocalist Marc Scherer (Scherer / Peterik) and star ’80s female guitarist Jennifer Batten (Jeff Beck, Michael Jackson).
Produced by Jim Peterik (Survivor, Pride Of Lions) and featuring guests such as Bill Champlin, Bryan Cole, all Mecca members and more, this will be an AOR blast for sure.

You better be prepared for STREAMLINE, the new Swedish band formed by ex members of the now defunct superb melodic rock act Diamond Dawn. ‘Save Me’ is the first single from their upcoming debut, catchy ‘n rocking.
I really love the ’80s Dokken-esque feel of ‘Live Forever’, the first advance from ARCHANGE, a new stunning band which debut album will be titled ‘FlashBack’… its title says all.
And we have the rocking first single from WAYLAND, the band managed by Jackyl’s frontman Jesse James Dupree (his son play drums in the band), a modern hard rock bunch but inspired by the classics.
More to come…