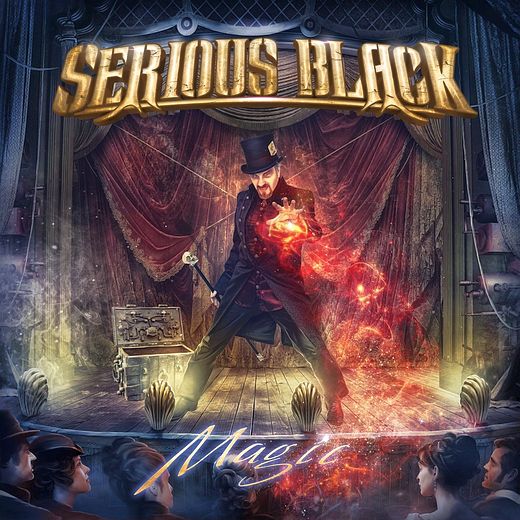 European super group SERIOUS BLACK is on a roll. Returning with a stable line up featuring members of some of the finest metal bands around (Helloween, Blind Guardian, Bloodbound, Firewind), they offer this Friday 25, “Magic“, the band’s third album in the same number of years.
Moreover, “Magic” is a concept album with a story to tell about “Mr Nightmist, a figure, through generations, shrouded in mystery and legend.” But the good thing of all, it’s that they rock better than never before.

Musically, Serious Black tells the story in their traditional European melodic power metal fashion, but really melodic, even catchy most the time.
They follow the formula created in the first album: twin guitar harmony, an abundance of fiery guitar solos, a groove-laden rhythm section, a dash of keyboards and clean melodic vocals, yet perfected and augmented.
Toss in a mixture of tempos and some true hard rock groove, benefiting the whole thing with catchiness and accessibility.

Opening the new CD is the short introduction “A Tip Of The Hat,” that introduces the listener to Mr. Nighmist, the album’s leading man who welcomes all to his world as he starts on his journey to his understanding of the world of magic and wanting to help those in need.
Thus the music kicks off in earnest and each band member delves right in using each individual instrument to accentuate the tale at hand.

From there, listen to the catchiness of “Burn! Witches Burn!”, the eerie acoustic guitars of “Skeletons On Parade,” the heavy vibe of the furiously fast CD highlight, “The Witch Of Caldwell Town,” (god, pay attention to the keyboards on this one,) the hard hitting but pure Melodic sound of “Lone Gunmen Rule.”

Midtempo “Now You’ll Never Know” features the incredible piano work of the supremely talented Jan Vacik, while “I Can Do Magic” is the very definition of Euro Metal as the music soars, the guitars are big & harmonic, the vocals are huge while fantastic keyboards lay a solid melody.
“True Love Is Blind” is excellent, and again on “Just Kill Me” and on “One Final Song” a gorgeous piano arrangement highlight the consistent nature of the songs.

There’s a cool concept in Serious Black’s “Magic”, but I guess you’ll enjoy the album for what it is: a killer slice of melodic metal with a modern sound and big production.
The guitars are stellar, Urban breed’s voice is terrific and all the other instruments are played to perfection.
Highly Recommended